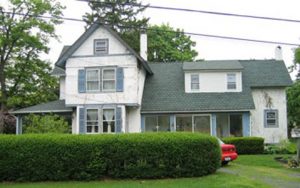 No. of Entrances and Placement: One front door on the south façade, one side door on the west façade.

Chimneys and Placement: Two brick chimneys, one interior near the center of the house, and one exterior on the north façade.

Architectural Integrity: Moderate; the original roofing material has been replaced, as have the windows.

Description:
This two-and-a-half story turn of the century folk house is porch fronted and stands three bays wide. The house has a cross gable roof that creates a prominent center wing projection on the front façade, as well as side wings. The house has a two story gable roofed wing at the rear, creating an overall cruciform plan. The rear wing features an integrated screened-in porch on the west façade, as well as a shed dormer. The front porch has also been screened in. It is supported by slender Doric columns. The house is clad in cream-painted stucco and asphalt shingle roofing. Decorative elements are painted blue, such as the fascia trim, window frames, and shutters. The windows throughout the house are one-over-one double hung replacements. The house features two brick chimneys, one at the center of the house, and one at the exterior of the north gable end.