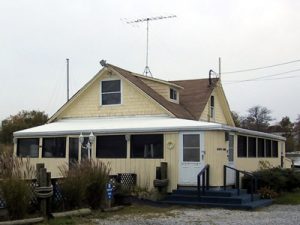 No. of Entrances and Placement: Doors on the south and west elevations.

Description:
This simple house stands on the property of the Blue Point Marina, a few feet from Corey Creek and just north of the Great South Bay. It has been converted into a restaurant. Its roof is a cross gable clad in asphalt shingle, and features one shed dormer. An enclosed wrap-around porch has been added to the south and west elevations. The exterior shows wood shingle at the visible gable ends, and wood board cover the first floor elevation.  The front entrance is comprised of two corresponding doors at the southwest corner of the building. The windows throughout are one-over-one replacements.

Historical Context:
According to Gene Horton, the original main building was once a barn. Located close to Corey Creek, it was moved from a large estate at the foot of Bergen Lane by the Davis Brothers Engineering Corporation. Over the years it has had a variety of uses. In an interview with Kurt Davis, he remembers it as a barn during his childhood years (1940s) and later as a person’s workshop. He speculates that once it may have been used as an oyster shed. On July 2, 1978 John Casey opened a restaurant called the Cull House. According to Horton, he built an outside deck, (now gone) from the hull timbers of an abandoned old wooden ship found on the property. The Cull House moved to Sayville in 1983 and another restaurant, The Anchor Inn opened. Jeanne McGorty the owned the business and recounted to Horton many of her customers were local regulars. Today the building houses yet another restaurant called the Blue Point Oyster Factory and Tim Carney is the manager. It has a large outdoor dining deck built partly over the water of Corey Creek and partly over land.