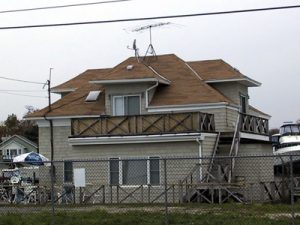 No. of Entrances and Placement: One front door on the east elevation.

Architectural Integrity: Moderate; one story wings have been added to the south and west elevations.

Description:
This simple house stands on the property of the Blue Point Marina, just a few feet from Corey Creek and just north of the Great South Bay. It has been converted into apartments. Its roof is hipped and clad in asphalt shingle, and features matching hipped dormers on each side. One-story wings have been added to the south and west elevations. These wings have flat roofs which serve are patios for the upper floors. The patios are accessed by sliding glass doors. The exterior is clad in beige wood shingle. There is one door on the east elevation. The windows are one-over-one double hung replacements, except for the new Chicago windows on the one-story additions.

Historical Information:
According to Hans Henke, the Patchogue Village historian, Tabachnik (a former school principal) was one of the owners. Now it is owned and run by his son. It has traditionally been used by both commercial and recreational boats, a “mix” as Henke describes. “Years ago, 20 years ago, the bay was loaded with clam boats and so forth. Those days are over. You only have a few of them left nowadays.”

According to Kurt Davis the original building was a carriage house from an original estate on the west side of the creek in the early 20th century. At the time of its move to its current location by the Davis Brothers in the 1950’s, it was part of the McNulty estate, owned by Judge McNulty. The structure was used at one time to house servants of the estate. Today it is used for apartments, and there have been many additions and changes made.

Interview with Hans Henke on January 22, 2004 by Long Island Traditions.