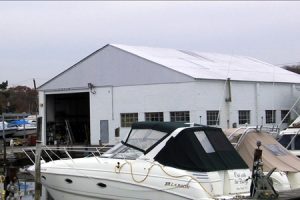 No. of Entrances and Placement: One door and one boat door on the east elevation.

Description:
This simple boat house was built in the 1960s. Standing roughly the equivalent of two stories, the house has a gable roof and is constructed of white-painted concrete block with corrugated sheet metal roofing. There are two main entrances on the east façade, one for foot traffic and the other for large boats.

Historical Context (by Cris Muia):
These two commercial buildings were once part of the Sea Shore Marina built and operated by Curtis Davis of the Davis family in the 1960s. He built the large storage building to be used as a showroom for boats. He intended to develop the marina further but plans were cut short by his death.

During the 1960s the smaller of the two buildings was also constructed. Over the years the “store area” had a variety of uses including a historic gun and military museum/store and a factory to produce fiberglass components for the railroad.

In the 1980s it was sold by the Davis family to Howard and Florence Svendsen. Over the years they again build it up to a working marina called the Blue Point Marina. The larger building is still used today for boat storage. The smaller building is used for the marina’s office.