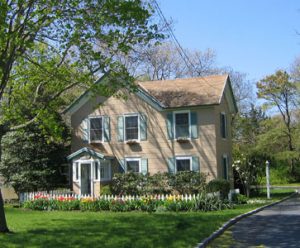 No. of Entrances and Placement: One front door on the west elevation.

Chimneys and Placement: One interior brick chimney on the south façade.

Architectural Integrity: High – Moderate; the original roofing and siding materials have been replaced, but the original windows remain with storms set in front of them.  The house is unaltered.

Typical of houses of the late Victorian period, this house has a cross gable roof and square, symmetrical massing.  Two stories high and three bays wide, this house is clad in beige asbestos clapboard with an asphalt shingle roof. Decorative elements include blue and white painted fascia trim and window and door surrounds. Blue-painted shutters frame each window. The windows are six-over-six double hung originals, with storms set in front of them. An enclosed pedimented portico with multilights frames the front door.  An interior brick chimney is located on the south façade.

This house represents the rise and impact of the resort area on the Blue Point community in the late 19th and early decades of the 20th century.

According to Gene Horton in his book, Blue Point, Then and Now, between the 18th – and early 19th -century there was limited summertime activities, such as swimming or spending time on a beach both in Blue Point and other surrounding South Shore communities. He describes the role of the Stillman cottage in Blue Point, located near the water which may have been the starting point for a changed attitude towards the water in Blue Point. Baptists gathered nearby on the beach for total immersion baptisms of their members. The cottage was used as a changing room for the participants. From there a growing number of bathers evolved and by 1885 there was an increase in usage of the bay for more recreational purposes.

Located only a few blocks from a once excellent bathing beach at the end of the street, complete with a Casino and other activities, this house was owned by the Davis Family and rented mostly as a private summer home. At one time the home was used as a summer boarding house. The current owners tell the story about a window on the 2nd floor which was once a door. It was used by the guests as a private entrance in order to keep the sand from the beach from going throughout the house.

Horton cites the time period between 1911 and 1915 as a “booming Blue Point” in terms of growth and prosperity. This reflected the increase in automobile tourism and the trend of Americans to take advantage of outdoor life in healthy non-urban environment. At this time there were approximately 600 residents in Blue Point.