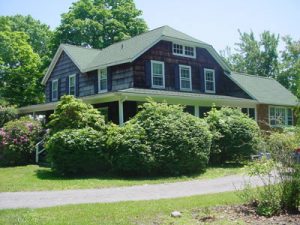 No. of Entrances and Placement:  centered entrance on north façade and side entry on west elevation

Architectural Integrity:  There is a rear (south) one-and-a-half-story front-gabled addition.  The west elevation of the wraparound porch has been screened.  The six-over-six double-hung sash windows appear to be new; the paired casement windows are original.

Description:
The building at 14 Newey Lane sits on the west side of Newey Lane, although its façade faces slightly to the north.  It has a one-story open-gabled outbuilding in the rear (south) lot, covered with wood shingles on the walls and asphalt shingles on the roof.  It has a double vertical board door on its façade (north) and a vertical plank (hayloft) opening above.

Historical Information:
According to both the 1873 Atlas of Long Island and the 1888 Atlas of the Towns of Babylon, Islip and the South Part of Brookhaven, Charles Newey resided at the building presently at 14 Newey Lane.  Charles Newey was the father of well-known shipbuilder, Captain Samuel W. Newey.

Charles Newey was born sometime between 1823 and 1825 in New York.  He appeared on the 1860 census in Fire Place (now Brookhaven Hamlet), in the Town of Brookhaven, Suffolk County, New York.  At this time, six-year-old Charles Newey was also living in the household, but had an unknown relationship to the family.  Charles Newey was a bayman in 1860 and owned real estate valued at $300 in Fire Place.  In the 1870 census, Charles L. Newey (age 14) was living in the Newey household.  His relationship to Charles Newey and his wife, Mary, is again ambiguous.  Charles Newey was a fisherman in 1870.  Ten years later, the census has twenty-four-year-old Charles Newey (the same “Charles” found in the earlier census records) recorded as “other.”  Otherwise, records have indicated that Sarah J. Newey, Mary A. Newey, William Shepp Newey, Julia Newey, Emma Newey, Captain Samuel W. Newey, and Bertha Newey were the children of Charles and Mary Newey.

Later on, one of Charles Newey’s sons, Captain Samuel W. Newey, lived in the building at 14 Newey Lane.  Samuel W. Newey was born about 1866.  He was recorded on the 1870 census in Fire Place and was called “Sammy” on the 1880 census.  In 1900 he was identified as a bayman and later became a shipbuilder.

Captain Samuel W. Newey was the best known shipbuilder in Brookhaven Hamlet and started building boats in 1900 from his shipyard at the southern tip of Newey Lane (then referred to as Eel Pot Lane).  He built boats of all description including sloops, yachts, yawls, boats for ferrymen, boats for the oil trade, commercial draggers equipped with heavy booms and hoisting gear, and little sailboats for the younger generation who wanted to race.  He did not use plans or half-scale models, as did Gil Smith, a professional gunner and craftsman of Patchogue.  “Anyway, no one could see both sides of the boat at once,” Newey claimed.