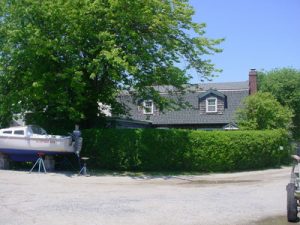 No. of Entrances and Placement:  off-centered on façade (south) and another on the one-story addition’s west elevation

Chimneys and Placement:  two exterior brick end-wall chimneys; one on the east elevation and one at the end of the one-story addition on the south façade

Architectural Integrity:  There is a one-story addition on the façade with new plate glass windows.  The three-sided bay window has new sashes and glazing.

Description:
The building at 16 Newey Lane sits on the west side of Newey Lane, although its façade faces south towards the canal that runs east to Carmans River.  Surrounding the building is the Newey-Tooker boatyard.  In the rear (north) lot sits a front-gabled one-story outbuilding with double vertical board swing doors, asphalt shingle roof, and coursed wood shingle cladding.

Historical Information:
The building was known as the Michelson boarding house. It
was built by Tom Michelson’s grandparents.  The house was passed down through the family.  There was a fire c. 1940-1950.