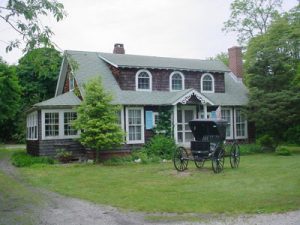 No. of Entrances and Placement:  centered French doors (full casement) on east façade

Description:
The building at 178 Old Stump Road sits on the west side of the road.  A gravel east-west path runs along the south elevation of the building into the rear (west) lot.

Historical Information:
According to current homeowner, Barbara Anne Kresse, the building at 178 Old Stump Road was one of many temporary buildings from the U.S. Army’s Camp Upton, presently the site of Brookhaven National Laboratory, which was converted into a residence.  Camp Upton was one of sixteen cantonments erected across the country to train the New York area inductees when the United States entered the First World War in 1917.  With the war’s end in November of 1918, the Army decided that Camp Upton was of no further use and deactivated the camp.  In August of 1921, a public auction emptied the Yaphank base of all its contents including household wares and appliances to complete structures.  During World War II, the camp was rebuilt primarily as an induction center for draftees and as a rehabilitation hospital for the returning wounded.