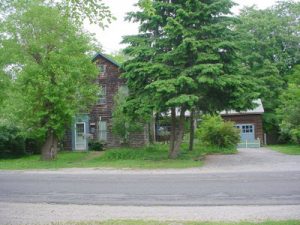 No. of Entrances and Placement:  off-centered nine-light door with two panels on west façade

Architectural Integrity:  one-story side-gabled addition on the south elevation; windows are original to the principal unit

Description:
The building at 179 Old Stump Road sits on the east side of the road with an east-west asphalt drive along its south elevation that extends to a one-and-a-half-story side-gabled garage with board and batten siding and asphalt roof shingles.  Its west façade features Craftsman six-light swing garage doors with iron strap hinges and an adjacent six-over-six double-hung sash window.  On the north elevation is an exterior gable end pipe chimney.

Wallace Halsey Swezey was born January 9, 1860 in New York.  He appeared as “Wallase” on the 1880 census in Brookhaven Hamlet, Suffolk County, New York.  He resided in the household of his parents, Hannah and William Egbert Swezey, and was a farmer.  In 1900, Wallace Halsey appeared on the census as a bayman.  By 1910, he was a dealer in ice and resided on Railroad Avenue.  Wallace Halsey Swezey operated his own ice business in 1920, but was back to farming in 1930.  Attending the Presbyterian Church (currently the South Haven Presbyterian Church) in South Haven, he became the most senior member of the congregation in 1940.  William Halsey Swezey died in 1951 in Yaphank.