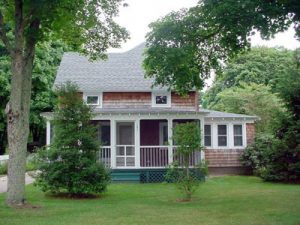 Architectural Integrity:  all windows have been replaced, porch on façade has been screened, one and two-story additions on the south elevation and in the rear (east)

Description:
The building at 187 Old Stump Road sits on the east side of the road.   A concrete drive runs east-west from Old Stump Road along the north elevation of the building to a one-story front-gabled garage in the rear (east) lot.  The garage has an asphalt shingle roof, wood shingle wall cladding, and double swing garage doors with iron strap hinges.

Historical Information:
According to an interview with current Bellport Village Trustee, Robert H. Lyons III, Tom Poole was a bayman who lived in the building presently at 187 Old Stump Road.  Mr. Lyons believes current homeowner, Mrs. Margaret S. Kock, is the granddaughter of Tom Poole and uses the building as a summer home.