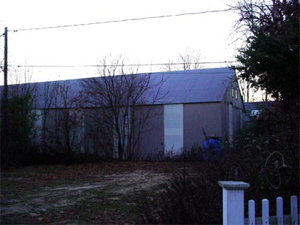 Owner’s Name: Post-Morrow Foundation, Inc., a not-for-profit corporation that preserves and conserves the rural, cultural, and historical character of the hamlet of Brookhaven and surrounding areas in Suffolk County.

Chimneys and Placement: not visible

Description:
“Shed Two” of the Carmans River Maritme Center sits at the southern tip of Newey Lane.  Its façade is opposite a bulkheaded dock and Arthur’s Creek, which runs east into the Carmans River.  In 1999, the Post-Morrow Foundation, Inc. purchased the site with the mission to operate an educational facility for the building, restoration and repair of wooden boats and to sustain maritime skills and traditions, particularly those associated with Brookhaven Hamlet and Great South Bay.

In 2002, the Carmans River Maritime Center became an independent entity, chartered by the State of New York.  The Newey Boat Shop has been totally renovated and upgraded to serve as the primary teaching venue.

Historical Information:
A big wood shed once stood on this site.  It was built by local boat builders, Sam Newey and Stanley Grodeski, from lumber (driftwood) that had washed up on “Smith’s shores” from the Hurricane of 1938.  Portions of the shed were replaced with aluminum sometime in the late 1950s or early 1960s (portions of driftwood can still be seen).  “Buninski and Shiebel” were the builders.
Source:
Gottfried, Herbert and Jan Jennings. American Vernacular Design, 1870-1940.  New York: Van Norstrand Reinhold, 1985.