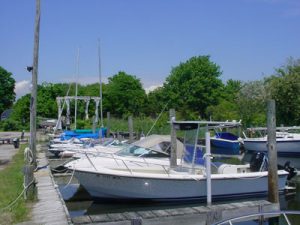 Description:
The Newey-Tooker-Starke Boatyard consists of two large sheds and a marina.  It is located at the south end of Newey Lane, just off the east end of Beaver Dam Road.  A narrow canal feeds the boatyard from Carmans River on the east.  Neighboring the boatyard, also to the east, is Squassux Landing.  Squassux Landing is a marina operated by the Brookhaven Village Association.

Historical Information:
Captain Samuel W. Newey, the best known shipbuilder in Brookhaven Hamlet, built boats from this boatyard located at the southern tip of what then was commonly called Eel Pot Lane at the turn of the twentieth century.  Around 1946, Newey sold the boatyard to Richard W. Tooker.  Boatbuilding at this time was modest, as Tooker mostly watched over the repair and storage of boats.  While dockage was limited at the Newey-Tooker-Starke Boatyard, boats at the neighboring Squassux Landing were hauled to the boatyard for repair, winter storage, or for yearly-barnacle cleaning.  Bill Starke purchased the boatyard from Tooker in 1980.  About two years ago, the Post-Morrow Foundation, Inc. acquired the property.  A portion of the site is currently leased to John Taylor as a modern wharf, operating as “S.N. 1 at the Tooker’s Boatyard.”  The Carmans River Maritime Center, administered by the Post-Morrow Foundation, Inc., serves as an educational facility for the building, restoration, and repair of wooden boats as well as to sustain maritime skills and traditions, particularly those associated with the hamlet of Brookhaven and Great South Bay.