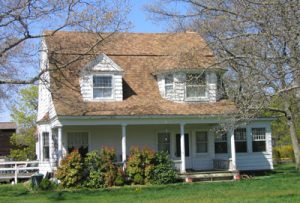 Chimneys and Placement: One exterior brick chimney to the north façade.

Architectural Integrity: High – Moderate; the original roofing material has been replaced. The rear wing of the house is likely an addition, as is the deck on the south façade.

This later Queen Anne has features reminiscent of the Dutch Colonial Revival style, such as a gambrel roof, flared eaves, and prominent porch. However, the asymmetry of its façade and the signature turret with conical roof denote the Queen Anne. The house’s gambreled rear extension creates a T-shaped plan. Standing two stories, this house is of frame construction with white painted wood shingle siding. Its prominent eave front gambrel roof is of asphalt shingle and also features an attractive gable dormer. The front porch is supported by slender Doric columns, and features square-sawn balusters. The windows throughout the house vary between eighteen-over-two and twelve-over-two double hung originals. A bay window features on the south façade. The house’s front door is set off-center beneath the integrated porch. The house has one exterior brick chimney on the north façade.

Originally built as a summer cottage in West Sayville, this house was moved to its present location in 1946/1947 by the Davis Brothers Engineering Corporation. The name of the builder or architect is unknown. It became the Davis family home of the next generation of Davis brothers. In order to make this a year round home, Mr. Davis gutted the interior of the home and winterized the structure. The house is currently being renovated.