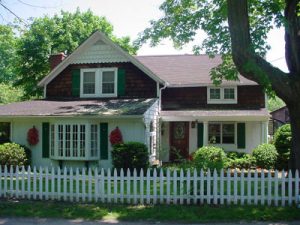 Decorative Features:  Tuscan column supports for the west façade’s entry porch and wraparound porch (extends from the façade to the north elevation), vertical plank shutters, scroll-sawn brackets under both the three-sided and squared bay windows, and gable louvers

Siding Material(s):  sawed wood shingle and vertical clapboards on the walls and fishscale shingles in the gable ends

Roof Style:  cross-gabled roof with a half-hipped veranda that wraps around from the façade (west) to the north elevation and a shed roof entry (on façade)

No. of Entrances and Placement:  off-centered entrance on the west façade and rear (east) entry

Chimneys and Placement: two interior concrete (stucco and block) chimneys in the rear and an exterior end-wall chimney on the north elevation, enclosed by the screened veranda

Description:
The building at 3 Newey Lane sits on the corner of Beaver Dam Road and Newey Lane.  Two outbuildings sit in the rear (east) and south lots.  At the end of the gravel east-west drive is a one-story front-gabled garage with three bays that is covered with diagonal wood siding.  To the south is a steeply-pitched side-gabled outbuilding with vertical wood siding and a shed-roof entry.

Historical Information:
According to the 1873 Atlas of Long Island, Ebenezer Albin owned the building presently located at 3 Newey Lane (Newey Lane is not shown on the map).  The building sits on the south side of Beaver Dam Road (then known as South Street).