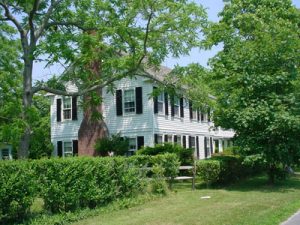 No. of Entrances and Placement: off-centered entry on south façade (covered by a second-story balcony), recessed rear (north) entry

Description:
The building at 331 Beaver Dam Road sits on the corner of Beaver Dam Road and Locust Road. On the south side of Beaver Dam Road, diagonally from the building’s façade, is a grassy meadow owned by the Post-Morrow Foundation, Inc., a not-for-profit corporation that preserves and conserves the rural, cultural, and historical character of the hamlet of Brookhaven and surrounding areas in Suffolk County. A one-story front-gabled double-car garage sits in the rear (north) lot with vertical board siding, paneled roll-up garage doors with a row of lights, and asphalt roof shingles.

According to current homeowner, Ann Wiswall, the second-story was added in 1913.