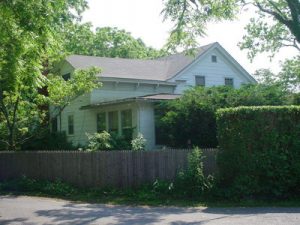 Owner’s Name:  At the time of the August, 1982 Society for the Preservation of Long Island Antiquities (SPLIA) inventory, Alfred Nelson.  Currently, the owners are James F., Lucia, and Norman I. II Nelson.

No. of Entrances and Placement:  façade (north) paneled door and rear (south) entry

Architectural Integrity:  There is a one-story enclosed porch on the façade (north) and a rear (south) one-story addition with a flat roof.  Fenestration throughout the building appears original and determines the period of construction for each addition.

Historical Information:
According to the SPLIA Building-Structure Inventory Form and the 1873 Atlas of Long Island, this building was owned by Robert S. Albin.  It served as a grocery store and residence.  Robert S. Albin’s brother, Elbert (Albert) Albin, appeared on both the 1870 and 1880 censuses in Fire Place (now Brookhaven Hamlet) as a fisherman/bayman.  According to the 1873 map, the buildings presently located at 6 Burnett Lane and 3 Newey Lane were in possession of Elbert Albin.

Ownership transferred to Charles Leonard Newey in 1915.  The grocery then became known as the “Downstreet Store” and carried fishing and boating supplies.  Charles Leonard Newey was born about 1856-57 in New York.  He appeared on the 1860 census in Fire Place (now Brookhaven Hamlet), in the Town of Brookhaven, Suffolk County, New York in the household of Charles and Mary Newey.  In the 1880 census, his relationship to Charles and Mary Newey was specified as “other.”  In the 1900 census, Charles Leonard was listed as a bayman and ten years later as a laborer on the “South Bay.”  In 1920, he was a retail merchant (groceries) and resided at 340 Beaver Dam Road.  He died between 1920 and 1930.  (Charles Leonard’s wife, Minnie, resided alone in Brookhaven Hamlet at the time of the 1930 census.  Therefore, Charles Leonard may have died in the interval between 1920 and 1930.)

In June of 2004, email correspondence with Lucia Nelson, daughter of Alice and Alfred Nelson, affirmed the residence was purchased by the Nelsons in 1944 for $7,500.  She further recounts:  “I regret to say that I have yet to search the records for previous owners and so forth. My mother told of taking my brother Norm down to the Albin Store in the summer of 1936 – this to buy an ice cream cone. She and my father were staying with his parents, Norman and Matilda, in the house now belonging to the dentist, Dr. Andors.  I do know some bits and pieces about the history of the store and others he appears to have run.  The original house was just a “box.”  Over time additions were added: to the west is a bedroom and bath and on the east two bedrooms and a bath. You can see the old roof in the attic.  At some point the kitchen was moved from Camp Upton and attached to the house.  Said kitchen always had a sloping floor; it was kind of a joke. The wooden counter top in the kitchen came from the store. The enclosed porch was there in 1944.  The telephone was, for some reason, on that porch. That was when our telephone number was “206!”  My mother could pick-up the phone and ask for Jane Corrigan O’Rourke who lived across the street or Betty Puleston who lived on Meadow Lane. By the by we still have that number sixty years later!”