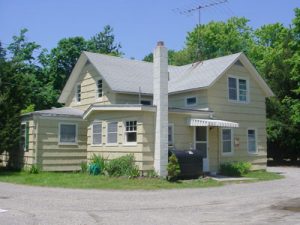 No. of Entrances and Placement:  north elevation and rear (east) entries, both with metal awnings

Architectural Integrity:  There is a one-story façade (west) addition with half- hipped roof  that wraps around to the south elevation of the building.

Description:
The building at 5 Newey Lane sits on the east side of Newey Lane.  Two outbuildings are located in the rear (east) lot.  The larger structure is front-gabled with a concrete block foundation, flat roof addition, and clad with painted wood shingles.  It has paired one-over-one double-hung sash windows, two half-glazed roll-up garage doors, and a metal corrugated panel roof.  The smaller structure has a shed roof with a dropped secondary roof, vertical board siding, casement windows, and an asphalt shingle roof.

Historical Information:
According to the 1888 Atlas of the Towns of Babylon, Islip and the South Part of Brookhaven, William Murdock resided in the building presently located at 5 Newey Lane.  Robert H. Lyons III, current Bellport Village Trustee, remembered Bill Murdock from his youth as a bayman.

In addition, current homeowner, David Ebner, stated that Stanley Grodeski, a boat carpenter who worked with Captain Samuel W. Newey in his shipyard, lived in this residence.  Grodeski was still building boats in 1968 when Stephanie S. Bigelow’s book, Bellport and Brookhaven: A Saga of the Sibling Hamlets at Old Purchase South,was published.