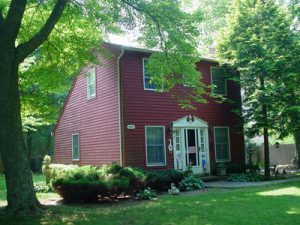 No. of Entrances and Placement:  centered glass door on façade (east) and rear (west) entry

Description:
The building at 6 Burnett Lane sits on the west side of the street.  An asphalt drive runs along the north elevation of the building to a side-gabled double-car garage in the rear (west) lot with vertical weatherboard siding, roll-up garage doors, and a wood shingle roof.

Historical Information:
This home was the residence of Elbert (Albert) Albin then gained title on March 4, 1868 and retained ownership until December 22, 1891.  His wife, Hannah, and son, Chauncey, were recorded as owners from March 7, 1890 to December 22, 1891, suggesting Elbert’s death about 1890.  He appeared on the 1870 census in Fire Place (now Brookhaven Hamlet) in the Town of Brookhaven, Suffolk County, New York as a fisherman.  He later appeared on the 1880 census as a bayman.  Elbert Albin is the brother of Robert S. Albin who owned and operated a grocery store in the building that is currently located at 340 Beaver Dam Road.

The building transferred ownership ca. 1970 from George Bishop to the Fath family.  They remodeled the building to its current appearance.