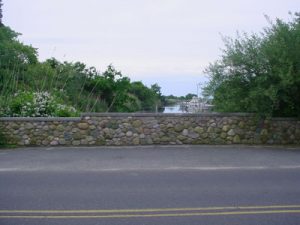 Date of Construction:  crossing has been in existence since mid-eighteenth century

Photographs from the late nineteenth-century identify a small wooden bridge at the junction of Beaver Dam Road and Beaverdam Creek.  Early twentieth-century postcards and photographs of the Beaverdam Creek Bridge illustrate wood rails with a river rock conduit.  The conduit has since been modified from a wide and rounded opening to one more narrow and squared.  The rubble stone has been replaced by poured concrete.  Beaver Dam Road has been widened and paved.

The river rock walls of the bridge may have been constructed as a Works Progress Administration (WPA) or Civilian Conservation Corps (CCC) project during the New Deal Era to provide both economic relief for unemployed residents and civic improvement.