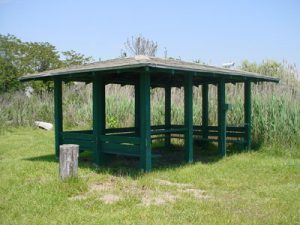 Architectural Integrity:  This gazebo may be the original structure displayed in the ca. 1900 postcard.  Roofing material and structural supports were likely replaced through the years.  The current gazebo may also be a reconstruction.

Description:
Squassux Landing is a small marina located at the eastern end of Beaver Dam Road.  A bulkhead at the end of the road provides public access to fishing and crabbing.  The area for boat landing and dockage, privately owned and maintained by the Brookhaven Village Association, is accessed by a gravel drive extending south from Beaver Dam Road.  The marina is bordered on the east by the Carmans River, which flows south into the Great South Bay, and on the west by the Newey-Tooker-Starke Boatyard.  The Carmans (Connecticut) River is a New York State Protected River and is bordered on the east by the U.S. Fish and Wildlife Service’s Wertheim National Wildlife Refuge.  About forty narrow docks, on locust posts, sit along the river’s embankment at Squassux Landing.  There are also two narrow canals to the west of the Carmans River used for docking.

The gazebo is to the east of the vehicle entrance from Beaver Dam Road.  It overlooks the Carmans River.

Historical Information:
Legend has it that Squassux Landing was named for Native American potter, Wesssquassucks, who kept his pottery kiln in the area.  Squassux Landing has also been called Squassacks Landing.

James Post, local benefactor, acquired the land in 1945 and gave it to the Brookhaven Village Association for the use and enjoyment of local residents.