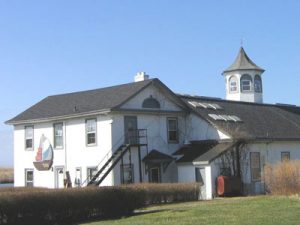 No. of Entrances and Placement:  boat side (2½ story),

History:
According to John Connelly, Vice-president of St John’s University, this is the second boathouse, which was part of the Frederick G. Bourne estate- Indian Neck Hall.  (Singer Sewing Company) The first one was smaller and was eventually sold to the Ockers family where it was subdivided into two parts. The Long Island Maritime Museum has one part of the original divided boathouse. The location of the second part of the boathouse is unknown.  Isaac H. Green was the architect. In 1908 Bourne had become Commodore of the New York Yacht Club and may have wanted a larger boathouse to show off his boats or receive visitors.  Bourne had also recently retired from the Singer Sewing Company.

Guests and friends brought their boats into the basin in front of the boathouse. Sir Thomas Lipton is said to have parked his boat here and spent some time on the estate.   A St. Lawrence skiff built in the Adirondacks and named “Commodore” was housed at this boathouse.  It was used for fishing, gunning and rowing on the streams and lakes of his estate. Today the skiff is housed in the Long Island Maritime Museum.   Adjacent to the boathouse is a boat shed, which is now covered in greenery and is in very poor shape.  A short walk on an unmarked trail through the bay grasses yields a spectacular, unobstructed view of the Great South Bay and its environs.  At present the building is not in use by the university.