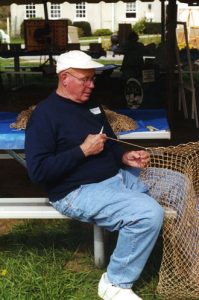 Lowell was born in West Sayville and has lived in the area his entire life. Lowell started working full time in the bay after returning from the Navy in 1957. He started fishing and catching eels with traps purchased from his father, who was also a bayman. Lowell, who enjoyed the independent lifestyle, would spend time clamming in between fishing and eeling. During a good year of eeling he would catch 10,000-12,000 pounds. He was one of the last bayman to use pound fish traps in the Great South Bay. He sold his nets in 1990 because the fishing had dramatically declined and finally ended his career in 1992. Lowell stays connected to fishing by making sinkers for a few commercial fishermen, going down to the docks, and reading commercial fishing publications.