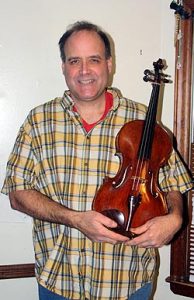 Ed Maday of Woodmere is a traditional violin maker, having learned this historic craft from a master violin maker, Vincent O’Brien in New Hyde Park, along with help from books, and by examining other violins. Ed first learned about violins, like many people, by playing it in elementary school. As he recalls:

“I used to look at the violin and wonder how it was built. I was interested in the shape, how the wood got into that shape. At 12, 13, I started to put pegs and violin strings on wood to see what they sounded like.” Later on my grandmother started to help me, when I was around 18 or 19. “My grandmother knew I liked violins and I wanted to fix violins and learn about violins. Every time she saw a violin at a yard sale or flea market she would buy them. She would bring these cheap violins to me every Sunday night. By the time I was 20 years old – there were 180 violins in the house. I would take the violins apart, rebuild them, do experiments and put them back together. Some of them I ruined, some of them I made better. I learned a lot this way.”

Guiding Ed was his father, a woodworker who built cabinets, boats, and furniture at home, where Ed lives today. “My father had all these abilities so when I wanted to make violins – certain things I couldn’t do without his help. I didn’t know how to sharpen a plane blade, so he would make a joint between two pieces of wood. My father could do that. He would cut things on the band saw if I had hard time with a coping saw. He had a work bench where I saw what he did, and then I did it.” Another important person was Olga Bloom, Ed’s violin teacher. “Every violin I did she would critique it. She had couple of very fine instruments herself. She would show them to me.”

Like other violin makers, Ed uses a wide variety of woods. “Usually for a violin, we use maple for the back, sides, and the neck, and spruce on the top – an evergreen type of soft wood. Up until 1990, I would always get a bow from a bow maker. Most bows are made commercially. A lot of work of a bow is done on a machine except there are a few guys that still do it by hand – where the sticks are planed out and roughed out and the frogs are carved and then mounted on the stick and horse hair put in.”

Ed makes his own varnish, based on a tradition that goes back to 17th-century Italy. He uses a variety of ingredients that he procures from nearby Pennsylvania and as far away as Poland. “I make them from madder root – I get it from two ladies in Pennsylvania who dye their own fabric. Another thing I use in my varnish is bee propolis – which comes out of the bee nest from the honey business. The resin I use is fused fossil amber.”

After a short time, Ed worked at various violin shops including Kolsteins’ in Baldwin, and later for Joe Tripodi. Today, Ed is known for various types of stringed instruments including violins, violas, cellos, double basses, and gambas, Gambas come in three sizes: treble gamba, tenor gamba, and bass gamba. More recently Ed has started making the Viola D’Amore, a flat back instrument that originated in the Middle East but was brought over to Germany and Austria in the mid 16th century. Ed learned to make them from another violin maker, Clifford Roberts.

When asked why he makes his living as a violin maker, something he’s been doing since 1981, Ed replies, “I love music, and I love violins. It is only natural that I would become a violin maker. Word gets around – really by word of mouth. Even though I have a website for over ten years, people really buy an instrument because they sat down next to someone that already owns one. They see it, hear it, and then give me a call.”

You can find Ed here.