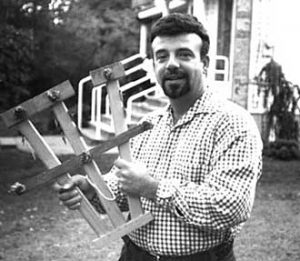 Mark Pezzano is a 2nd-generation Italian American and singer — scholar of traditional Italian folksongs. A resident of Bethpage, he was born in 1961 and grew up in Jamaica, Queens in an Italian and Polish community. As a young boy he learned many folksongs and other cultural traditions from his grandparents and relatives that emigrated from the Neapolitan region of Italy in the early 1900s. His grandparents Margaret and Marco Castaluzzo and other relatives were farmers, sheepherders, cheese makers and stonecutters. When they arrived in the United States the men became mechanics and plumbers while the women worked as sewers and embroiders. They continued to practice many of the traditional customs including winemaking in the basement, tatting and crocheting tablecloths, and sewing costumes for traditional festivals honoring the patron saint St. Lucy. The Castaluzzos also kept nanny goats in the backyard.

Mark knows hundreds of humorous songs, religious ballads, stories of tragedies and a few romantic tributes that have been passed down through dozens of generations, a lifelong avocation for Mark. As a very young boy he remembers how his mother sang rhymes in order to get him to eat. Other songs have to do with donkeys, the traditional work animal for the farmers, seafaring captains who stole their crew’s girlfriends, and various humorous songs. During the past 20 years he has interviewed many Italian immigrants from Sicily and Calabria in order to understand the different songs of Italy’s regions. Mark also plays the tamburra, mandolin, the “jews harp” also known as the “gypsy’s trumpet” and castanets. He performs at Café Europa in Mt. Vernon, but also sings while he works as a building manager. Like other traditional musicians, Pezzano continues the tradition because “it brings back a lot of memories, memories you don’t want to let die. The music makes you feel like you belong, and it’s important that you not give up the world where you came from.”