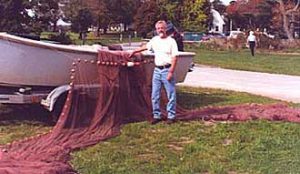 Lenny Nilson was born in Bay Shore in 1947 and spent the first five years observing his father who had a shrimp and killie business. By age 16 he began working on the bay. He has worked as a commercial fishermen for the Sunrise Fish Company, and currently owns L & L Bait. Lenny makes seine nets which he uses to catch baitfish. He believes that “any good fisherman who knows what he is doing makes his own nets.” Lenny also loves being on the water.