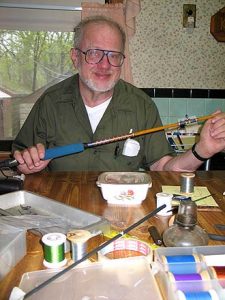 Born in Little Neck, Queens, Pete Ames is a 3rd generation fishing rod maker who has made hundreds of fishing rods for sport fishermen on Long Island. He is one of a very few traditional rod makers left on Long Island, a craft that he learned from his father and grandfather as a young boy. As Pete recalls:

“My earliest recollections were here in Little Neck which is bounded by water on three sides. There were boatyards at the end of the street (Little Neck Parkway). People took me out on their boats because I gravitated to water. My father and grandfather were fishermen. We used to go fishing in Patchogue back in the 50s. My earliest memories were fishing here on Peterson’s Cove with a drop line. I remember catching flounders as a kid. Father enjoyed fishing. I took to it as a child.”

Like most fishermen, commercial and recreational alike, Pete enjoys the escape that going fishing brings: “I’ve fished everywhere from Canada down to the Florida Keys. I never cease to get tired of it. Fishing is one of the few enjoyments where you can get to know yourself — it’s you, the water and the fish.”

To the uninitiated, fishing can be a wonderful and at the same time complex endeavor, especially here on Long Island, where there are many different environments for fish and fishermen. The three major bodies of water, Long Island Sound, the South Shore bays and the Atlantic Ocean attract similar species, including bluefish, fluke and flounder and weakfish, but at different times of the year due to water temperature differences. In addition the depth and rockiness of each body of water varies, which greatly affects the fishing methods.

“Flounder fishing began in the middle of March. Fluke was after the weakfish run in May. In June came weakfish, fluke, bluefish. And in April it was stripped bass.” Striped bass were most commonly referred to as stripers.

When Pete first started fishing there were plenty of fish to catch. “Fishing was more plentiful then. It was before pollution which did not become a factor until the 1960s. You could fish all day for flounder without the use of chum. There were great runs of fluke and weakfish back then.” Along with fish, Pete also caught blue claw crabs in Moriches by using a killey ring, a traditional recreational tool made out of wire or coat hangers that is still used today. Menhaden are the most common bait fish, which was traditionally harvested in the Peconics but today typically comes from as far away as North and South Carolina.

Pete’s earliest memories of fishing were as 5-year old, using a simple string and a hook. When he got a little older, Pete remembers that, “We would go to Geiger’s boat rental in Center Moriches, it’s no longer there. We’d rent a rowboat in those days. Motors weren’t as plentiful. You could do well just drifting on the bay.” After his grandmother died, Pete’s grandfather moved to their home. Pete recalls that “I used to fish right here on the Sound with a drop line. We had blackfish, striped bass and a few other things.”

From the age of eight, Pete began fishing on his own, using fishing rods made by his father and grandfather, as well as new ones manufactured elsewhere. “When I was ten, my father bought me one of the first spinning rods that came into this country — it was a Japanese-made rod. Like a good little 10-year old I went off to Little Neck Bay. I was fishing with a blood worm. The rod was bent in half. I was watching the line peel off the reel. I saw which way the line was going. About 25 minutes later I brought in this 35-pound stripped bass. I broke the reel. After I showed him (my father) the fish he just said ‘oh.’ The next Saturday my father bought me a new ‘top of the line’ reel. One time I stripped down a Japanese rod and rewrapped it with new guides. Dad thought it was a new rod. He eventually retired from rod making and asked me to take over.”

Since then Pete has made fishing rods not only for his family and friends but also for people who have heard about him through word of mouth. Pete is active in the Manhasset Bay Sportsmen’s Club, whose members have frequently asked him for custom made fishing rods, along with other sports fishermen.

According to Pete, “The hardest part is the laying out the parts. A lot of different things go into it. The range is unbelievable. You are basically making something to fit that specific person. It helps to be a fisherman and imagine how your rod will work. It has to be laid out symmetrically and give the illusion of being one solid piece. It’s got to be the most tedious thing in the world. The hardest part is having the time. I can usually do it in one sitting — 3-5 hours. I hate to leave something undone.” Pete’s most unusual requests came in the 1970s, when people would ask if he could make the rod the same color as their car. “They liked the idea of the color coordination.” In order to accommodate them Pete had to paint the rod blank. Pete explains that his fishing rods “can run anywhere from $80 on up” depending on a number of factors including the guides used (gold plated cost more), the design of the wraps that hold the fishing guides, and other materials used.

However the quality is unquestioned. Pete recalls that one time a sports fisherman on board a party boat was bragging about a rod he designed. “There was this loud mouth fisherman bragging about his fishing rod and how he made it. I looked at it and thought it looked familiar — it had my name on it.” When Pete asked him whether his name was Pete Ames, he remembered, “I’ve never seen a person turn so red.”

In recognition of Pete’s work and his commitment to tradition, the NY State Council on the Arts has awarded him an apprenticeship grant, which will compensate him for teaching his son Pete, age 24, who has watched and assisted his father his entire life, the intricate skills and knowledge that he learned from his father and grandfather. Pete recently graduated from the School of Visual Arts, a testament to his talent and creativity. Like his father, “young Pete” is also a gifted fisherman.

“He can fish, says Pete. He has a gift. He won the party boat pool — everyone chips in money, $3 or so. The person who catches the heaviest fish that day wins. I would never bet against that kid anyday. The first eight times he won the pool every time. It’s scary. Last time he was sitting in a boat cabin and he came out, drops his line overboard and not a minute later pulls up the biggest flounder. He goes back inside. And he won the pool. I have no explanation for it.”

Pete was one of the participants in the Smithsonian’s Folklife Festival in 2004 and he and his son participated in Long Island Traditions’ arts-in-education programs. Pete Ames died in November 2015.