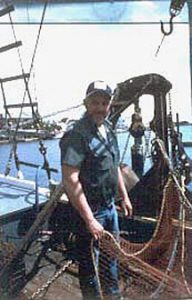 Tony Sougstad was a dragger fisherman who lived in Freeport from the 1960s. He became a dragger boat captain in 1970, after working as an engineer, because he preferred working on the water—a tradition common in Norwegian families. He caught a variety of species, including fluke, flounder, squid, and whiting. Like most fishermen, Tony learned to make his own nets. Tony and other dragger fishermen struggled to make a living, as fishing regulations restricted the amount of fish that could be caught. To make ends meet, Tony worked on the bay. Tony was a master storyteller and fishing net maker. He was very knowledgeable about the ocean’s ecology and how regulations have affected fishermen. He passed away in October 2019.

Here is an important story told by Tony in 1987:“We got up in the morning and we could see in the sky little puffs of smoke, that signals bad weather. So we said we’ll make another couple of tows and we’ll get out of here. So we started home and on the way home the wind came out of the east, then it came out of the southeast, northeast and pretty soon it was blowing pretty good. The ocean was fairly white. There was also a leak in the boat that sprung open again. About 5 o’clock in the evening it was raining and blowing so hard, the rain slanted across the deck, it hurt my face it hit so hard. So about 8:30, 9 at night we decided we couldn’t make any more headway because the boat was filling up with water and she was sloshing around so violently there was no way we could pump it out. I was pumping like mad and saying ‘Hail Mary’ like mad, I figured we had it. The boat was going down.

We called Chatham Coast Guard and they sent a helicopter out, but they went to the wrong boat. We’re so tiny out there, who would expect to look for a tiny little boat all the way out there? So they hovered over a Russian ship that was maybe 5 miles from us and they said no, we’re not the ones who are in trouble. It’s the little guy over there. So they came around and dropped us 3 pumps. And the boat got dried out. And then he left, the helicopter left. I thought “Oh my god, where is he going?” So the Russian came alongside and he yells “Hey cap-I-tan, you need assistance?” That’s the only English that he knew. I said yes yes. So they threw us a line. They tied us up and I’m telling you, when the boat was dried out and we were tied up in back of that Russian, I didn’t care where they towed us.”