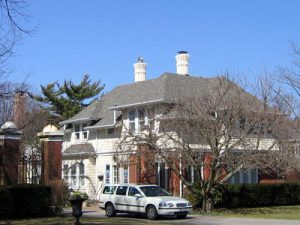 No. of Entrances and Placement:  One front door on the south elevation.

Description:
This elaborate Arts and Crafts house has a strong Tudor Revival influence, and appears to have been built as a gate house to a former estate. If it was not an original gate house, then it was built later with part of the monumental gate’s walls incorporated into its structure. The house stands two stories high and has a rectangular plan. Its roof is elaborately hipped; the main hipped roof features hipped dormers of varying sizes. The north and south façades have two dormers; the east and west have one each. Window bays on the north and south façades are topped by similarly hipped roofs. The roof and dormers have wide, overhanging eaves with exposed rafters. On the west façade, the red brick wall of the monumental gate creates the first floor’s exterior. Above it, a wing featuring tall, narrow ribbon windows projects and is topped by the hipped dormer. The wing features exposed rafters and brackets where it meets the brick wall. Its low hipped roof, use of exposed rafters and eave brackets, and overall layered appearance define this as an Arts and Crafts home. However, the influence of the Tudor Revival is evident in the house’s tall, narrow windows, small window panes, and massive chimneys. The house has two interior brick chimneys, both topped with decorative chimney pots. The house is clad in yellow-painted wood shingle with white-painted trim and asphalt shingle roofing. Most of the windows are six-over-one double hung originals with storms set in front of them. Multilights on top of tall casements are also used.