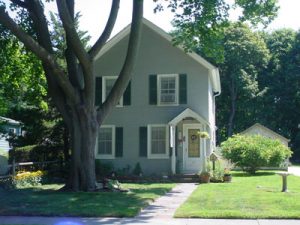 No. of Entrances and Placement:  off-centered entrance door on façade (west)

Description:
The building at 61 West Avenue sits on the east side of the street with an east-west concrete drive running along the building’s south elevation. A poured concrete walk extends westward from the façade’s entrance door to West Avenue.

Historical Information:
According to retired fisherman Lowell Ockers, a bayman with the surname, “Verbeake,” lived at this residence. He was known for haul seining and skimmering. Another former resident with the surname, “Rudolph” owned a boatyard.  (According to Sanborn Fire Insurance Maps, there was a William F. Rudolph who owned an oyster house on what is now Shore Road.) This building was located at 18 West Avenue until sometime after August, 1949 when West Avenue was renumbered.