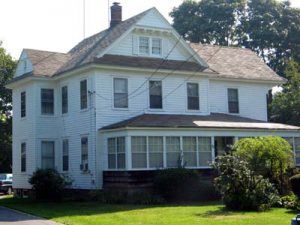 No. of Entrances and Placement:  centered entrance door on façade (west)

Architectural Integrity:  one-story porch across the façade (west) has been enclosed with ribbon windows and wood shingles; wall cladding and windows are original

Description:  The building at 77 West Avenue sits on the east side of the street with an east-west asphalt drive running along the building’s north elevation.

Historical Information:
According to retired fisherman Lowell Ockers, house builders “Barkenbusch” (or Barkenbush) lived at this residence. This building was located at 121 West Avenue until sometime after August 1949 when West Avenue was renumbered.