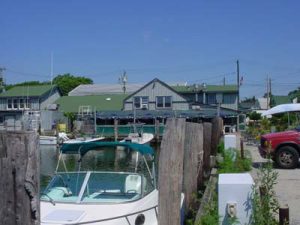 Siding Material(s):  board and batten

No. of Entrances and Placement:  off-centered entrance door on the façade (south) and two separate entrance doors on the east elevation

Description:
The building at 130 Atlantic Avenue sits on the corner of Shore Road and Atlantic Avenue. An asphalt parking lot borders on the east and rear (north) elevations and the West Sayville Boat Basin on its façade (south).

Historical Information:
According to Sanborn Fire Insurance Maps, this building was one of three units that configured the Frederick Ockers Oyster House (from around February 1909 to around August 1949). Unit One served as the oyster opening and storage facility.