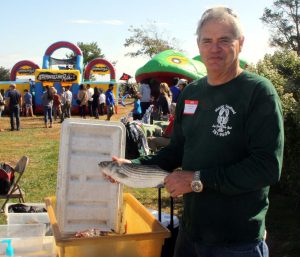 Since the 1700s Long Island’s history has centered on the bays, rivers, oceans and estuaries.  Baymen have harvested clams, oysters, eels and killies for their living.  They have built garveys and duck boats, bay houses on the marshlands, and traps, nets, and other necessary tools.  In the last 50 years the surrounding waters have changed greatly. There are fewer commercial baymen and fishermen today, yet they carry on a powerful history.

Baymen and fishermen have worked the waters to provide fish to millions of consumers throughout the world. It is grueling, physical work, and fishermen must also spend thousands of dollars to buy and maintain their equipment, harvest bait in order to attract fish, and develop a network of customers who will pay them a fair price. The work is also risky, as conditions on the water can be highly dangerous.

During the past 20 years, there have been catastrophic events that have decimated the population of baymen who harvest fish and shellfish.  Superstorm Sandy destroyed boats, nets and traps owned by fishermen.  At this festival, you will have the chance to meet baymen and fisherman continuing these legacies, including Craig Oddo, Bill Fetzer, Tom Jefferies, George Rigby, Larry Seaman, John Remsen, Mark Nuccio, Chris Hale, Ed Thomas, Reed Riemer, Collin Weyant, Paul and Flo Sharkey, and Chuck Tekula.

The Tobay Boat Show will take place at Tobay Beach from 10am-6pm.