Join us for our second event in this series: a screening of the 2020 documentary, A World Within A World: Bay Houses of Long Island, and discussion with the film’s Executive Producer/Director, Barbara J. Weber, and Long Island Traditions Director, film consultant, and bay house advocate, Nancy Solomon. Following the conversation, please enjoy refreshments and a rousing live performance by Bob Wright and Harbortown!

Tickets are free, but reservations are highly recommended.

A World Within a World: Long Island Bay Houses examines the lives, history, and experiences of bay house owners in the Town of Hempstead from both a historical and contemporary perspective. Based on fieldwork by folklorist and maritime ethnographer Nancy Solomon of Long Island Traditions, local filmmakers Barbara Weber and Greg Blank capture the essence of how bay house owners have persevered and endured through severe storms and hurricanes as well as eroding marshlands all while preserving traditions that began in the early 19th century. The film profiles Long Island families who have owned bay houses for over 100 years including the Muller, McNeece, Burchianti, Warasila and Jankoski families. All screenings will include a discussion and Q & A session with the filmmakers – Barbara Weber and Greg Blank – and Nancy Solomon of Long Island Traditions. Watch the trailer here. 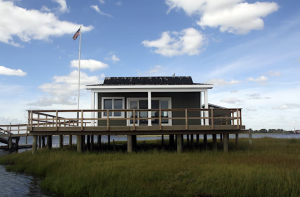 Nancy Solomon received her M.A. degree in American Studies & Folklife Studies from George Washington University. She is the Executive Director of Long Island Traditions. Solomon is the author of Boat Building and Boat Yards of Long Island: A Tribute to Tradition, On the Bay: Bay Houses & Maritime Culture of Long Island, West Meadow Beach: A Portrait of a Long Island Beach Community and Traditional Architecture of Long Island: A Teacher Resource Guide. She is a columnist for Voices published by New York Folklore and the Encyclopedia of American Studies Online. She is the curator of “Waterfront Heroes,” “In Harm’s Way” “Freeport Waters” along Freeport’s Nautical Mile, co-curator of “From Shore to Shore: Boat Builders and Boatyards of Long Island and Westchester”, and curator of “Sandy Shores: The creation of Jones Beach”, an outdoor permanent exhibit at Jones Beach. She was the primary advisor to filmmaker Glenn Gebhard 1994 documentary “Baymen” and the film “A World Within a World: Bay Houses of Long Island.” She was the historic preservation consultant to the Village of Great Neck Plaza and the maritime culture consultant to the South Shore Estuary Reserve and currently is working with the Village of Rockville Centre. Solomon has lectured extensively on historic preservation and documentation methods for Columbia University’s Historic Preservation Program and area colleges.

Barbara J. Weber is an award-winning film composer, producer and violinist. She has scored the music to over 30 films. Several of these films have been selected at major film festivals such as the Cannes Film Festival in 2012. Barbara won the diamond award for best original score at the New York Film Festival for “Alienated’ in 2015. She has also received nominations for several other film scores for award winning films at various festivals throughout the United States and in Europe. Barbara is a resident of Long Beach, NY. She felt compelled to tell the story of the Long Island Bay houses. A “World Within A World: The Bay Houses of Long island” is the first film she has produced and directed.

Bob Wright is a multi-instrumentalist and award-winning songwriter, and founder of the ensemble Harbortown, whose musical repertoire, ranging from acoustic to bluegrass to folk to maritime, is often mistaken for traditional songs. Their songbook is nurtured and inspired by the group’s immigrant roots, which run deep beneath the surface of America and back to the places from which they came. Harbortown’s sound surfaces in a modern world, constructed with a contemporary sensibility and a comforting resonance with the past. Harbortown is: Jan Christiansen, Bob Conroy, Bill Doerge, and Bob Wright. 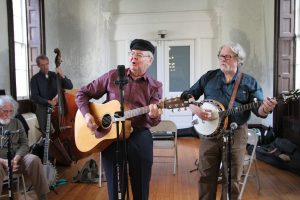