Join for the third and final event in this City Lore series, “In Harm’s Way: Climate Change in NY Harbor, A Decade’s Reflection on Hurricane Sandy.” The program will include the screening of two films, The Storm, (2012) and Everything Is Different Now: Rockaway After the Storm (2015), and will be followed by a conversation with documentarians, Waterfront Heroes, and Hurricane Sandy survivors reflecting on their experiences of the storm and the ten years following. 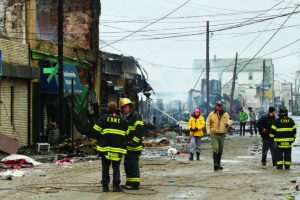 Tickets are free, but reservations are highly recommended
To RSVP, click here.

The Storm (2022), by Coney Island History Project director Charles Denson. Denson rode out Superstorm Sandy in Sea Gate, where his apartment and car were destroyed by the storm surge. The 20-minute film shows rare and dramatic footage of the storm coming ashore on the evening of October 29, 2012, as well as preparations for the storm, the surge at Coney Island and Sea Gate, and the storm’s aftermath.

Everything is Different Now: Rockaway After the Storm (2015),

In October 2012 Hurricane Sandy blew New York City’s historic boardwalk off its pilings and just as suddenly jutted Rockaway, the city’s remote barrier island, into the eyes of the world. Everything Is Different Now: Rockaway After the Storm documents the devastation caused by the largest storm-to-date ever recorded in the Atlantic Ocean while unfolding the larger tale of a neglected jazz-era beach community, already struggling to re-define itself, now facing a more precarious existence on a low-lying island.

Love for beach in the time of global warming adds tension to the stories of diverse Rockawayans: restauranteurs, surfers, a former police officer, a construction worker, artists, activists, all practicing resilience. Climate-change physicist and former Rockaway resident Michael Oppenheimer provides scientific context to the stories. Everything Is Different Now celebrates the famously carefree Rockaway spirit as residents and businesses re-build and prepare for the next, bigger storm.

In Everything Is Different Now, survivors of Superstorm Sandy tell their stories – how terrifying the storm was, the fires that spread, the bay that surged and drowned part of Rockaway, homes and beloved items gone forever. The storm was so bad it destroyed one third of the boardwalk more than six miles long, itself a place of history and memory. Recovery and rebuilding are as much a part of the film as are stories of terror and growing understanding of climate change, and a tender care for the earth, sand, fellow humans emerges.

David Sharps, Founder and Director of the Waterfront Museum: The last of its kind afloat, the Lehigh Valley Barge #79 was built in 1914 for the railroads that worked in the Port of New York. The barge managed to survive the mid-20th century replacement of lighters with container ships, only to nearly molder away in the mudflats below the George Washington Bridge. That’s where David Sharps encountered it. Sharps, who was introduced to the waters of the world as a cruise ship juggler, bought the barge from a pile-driver for $500 in 1985. With the help of a few workers and many volunteers, Sharps gave new life to the vessel by creating a floating museum and showboat, and moved it to Red Hook, Brooklyn in 1994. The Waterfront Museum receives nearly ten thousand visitors each year. www.waterfrontmuseum.org

Nancy Solomon, Executive Director, Long Island Traditions: Solomon received her M.A. degree in American Studies & Folklife Studies from George Washington University. She is the author of Boat Building and Boat Yards of Long Island: A Tribute to Tradition, On the Bay: Bay Houses & Maritime Culture of Long Island, West Meadow Beach: A Portrait of a Long Island Beach Community and Traditional Architecture of Long Island: A Teacher Resource Guide. She is the curator of “Waterfront Heroes,” “In Harm’s Way” “Freeport Waters” along Freeport’s Nautical Mile, co-curator of “From Shore to Shore: Boat Builders and Boatyards of Long Island and Westchester”, and curator of “Sandy Shores: The creation of Jones Beach”, an outdoor permanent exhibit at Jones Beach. She was the primary advisor to filmmaker Glenn Gebhard 1994 documentary “Baymen” and the film “A World Within a World: Bay Houses of Long Island.” She was the historic preservation consultant to the Village of Great Neck Plaza and the maritime culture consultant to the South Shore Estuary Reserve and currently is working with the Village of Rockville Centre. Solomon has lectured extensively on historic preservation and documentation methods for Columbia University’s Historic Preservation Program and area colleges.

Seetha Wickramasuryia: Born in Tangol, Sri Lanka, Wickramasuriya is one of the few elders in Staten Island’s Sri Lankan community who writes and performs traditional kavis — simple-meter sung poems improvised over a set melody that narrates daily life. Having grown up in the southern coastal rice paddy region of Sri Lanka, she is a specialist in the kavi repertoires relating to rice harvesting, stick fishing, and weatherlore. During Hurricane Sandy, Wickramasuriya exhibited great bravery by saving her bedridden home-care patient Millie from rising water levels along Staten Island’s East shore. The pair were rescued via a police boat and the heroic tale became the basis for a series of original kavis by Wickramasuriya dedicated to the storm’s aftermath. English language translation by folklorist and longtime collaborator Naomi Sturm-Wijesinghe.