Bay houses stand on the fragile marshlands in the Town of Islip and the Town of Hempstead.  Built by fishermen and baymen, duck hunters and recreational boaters, they come in all shapes and forms, with as many variations as there are builders.  Most of the houses that stand today range in age from 30 to 100 years old.  They are usually small, containing two or three rooms, with a porch and large deck.  The houses generally face south, in order to take advantage of the sunlight and the cool north-south breezes.  They stand on “mud sills” consisting of long poles that lay on the marshland with upright posts to support the platform which in turn supports the house.  Unlike traditional houses there is no permanent foundation.  Many different kinds of materials were used for building the houses, which could take a day or a year to complete.  Frances Judge of Freeport remembered a house made solely of discarded doors, while bayman George “Mush” Carman and his fellow fireman of the Baldwin Hose Company built their shack from an old garage.  Telephone poles are commonly used along with demolished clapboard houses.  Because the houses are accessible only by boat, would-be owners often enlist help from friends, family, and co-workers in transporting building materials from the mainland to the marshlands. 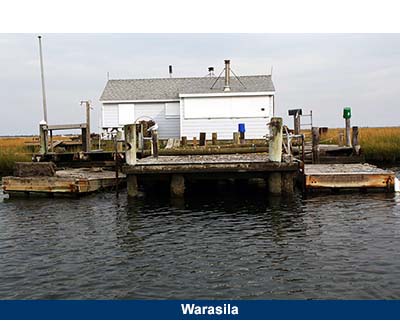 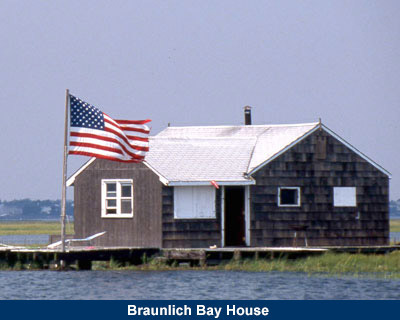 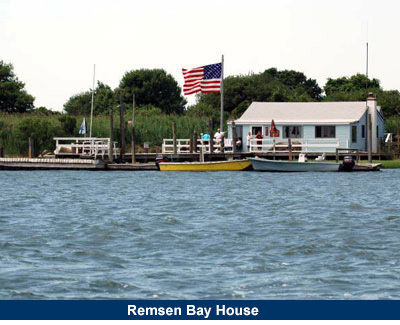 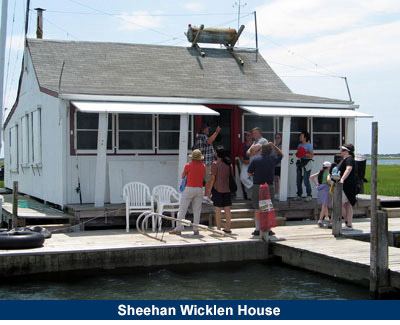 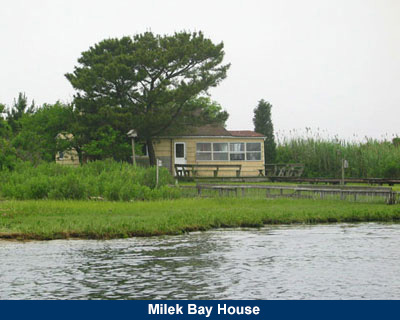 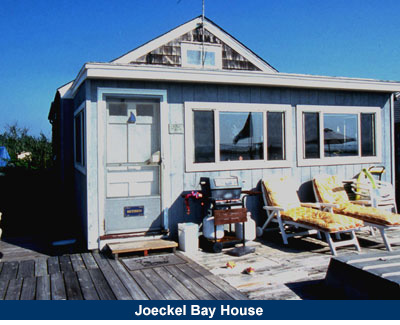 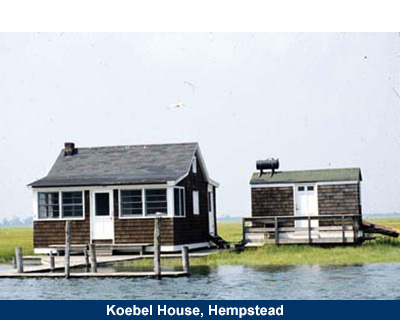 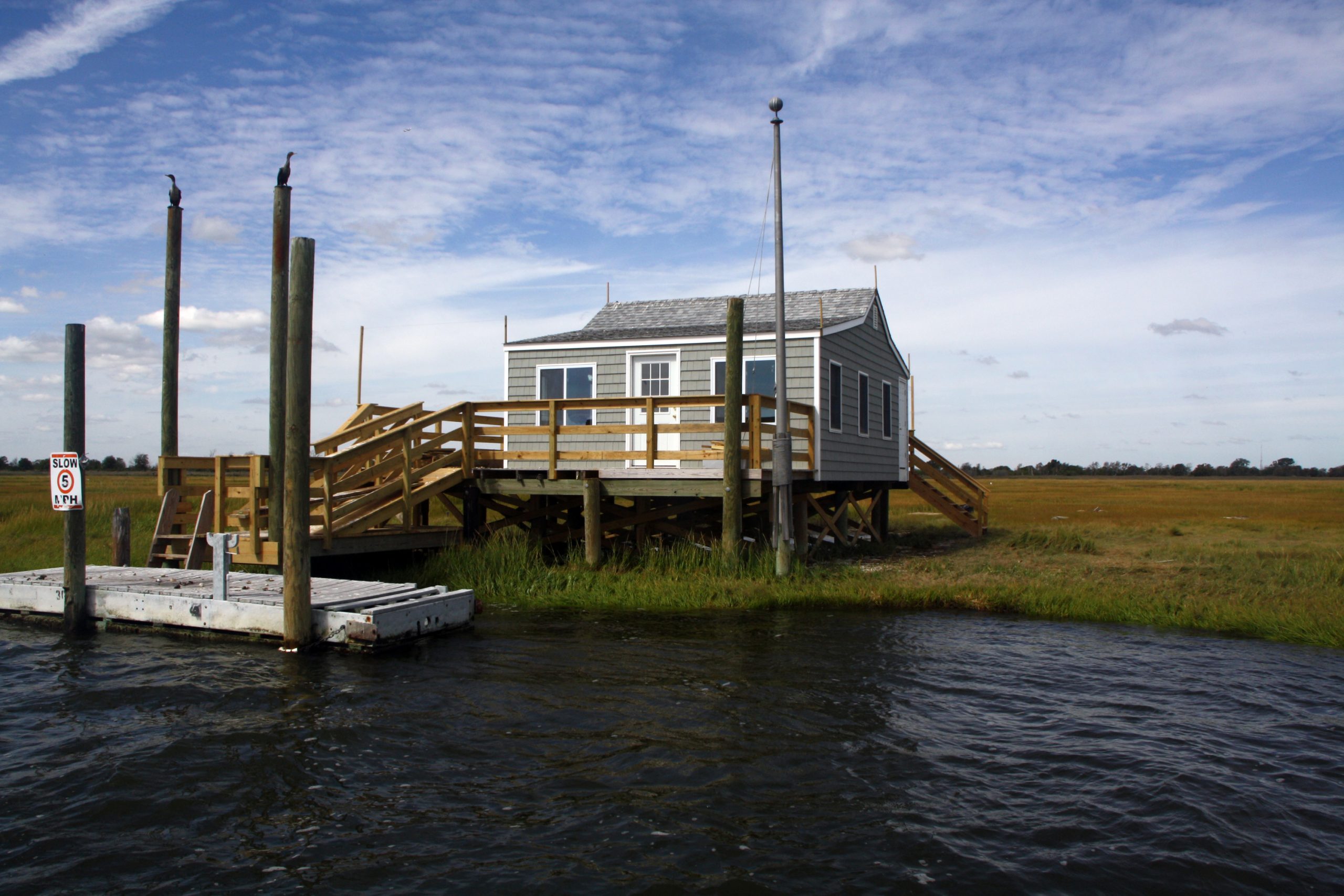 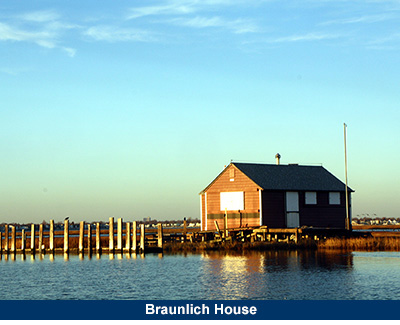 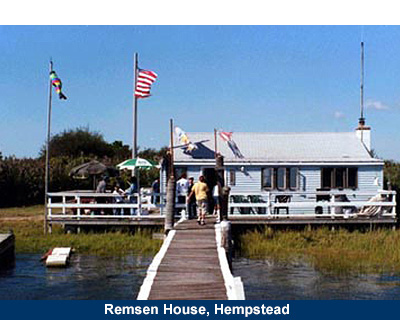 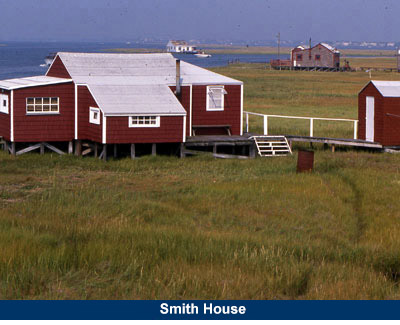 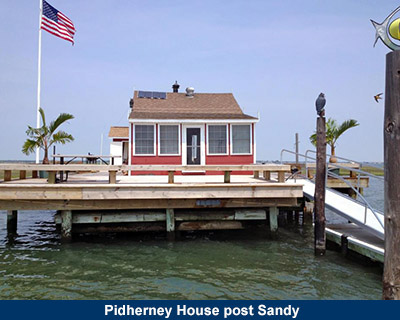 Many changes have occurred on the bay and off; these changes have had a direct impact on the houses.  In 1933, the Meadowbrook and Wantagh parkways were built on marshlands where many bay houses stood.  As a result, scores of houses, including the house of Mary Carson, were moved or demolished.  Other factors also make house-moving necessary, notably erosion.  With the increasing popularity of recreational boating, there has been significant erosion of the marshlands; Gertrude Jankoski remembered that in the 1950s, due to erosion, her house was moved on rollers while she was inside washing the dishes and cooking on the wood stove!  Yet there were other reasons why bay houses moved, shifted, and even disappeared.  When hurricanes and storms hit the shore in 1938, 1944, 1992, and 2012, they scattered and destroyed dozens of houses up and down the coast.  Many owners battened down their houses and boats, fearful that they would lose everything if precautions were not taken.

My husband had the boat tied across the creek, he had a rope going all the way across the creek in the middle of Mott’s Creek there.  And that’s where he sat out the hurricane.  Well, the boat was alright.  And then, somebody comes up and says, “Your house washed away.”  He never thought about that!

High tides and severe storms also periodically caused damage to many bay houses and their furnishings.  In addition to nature’s wrath, owners must also contend with vandals who routinely destroy the “shacks,” forcing owners to remove their valuables.  Despite these persistent threats, the bay house dwellers continue to invest considerable time, money, and energy in their houses.

Today there are approximately 30 bay houses located near the communities of Woodmere and Hewlett, going eastward towards Wantagh.  To learn more about the bay houses you can purchase our book On The Bay or our video A World Within a World. Over 20 were destroyed by Hurricane Sandy in 2012 but have been rebuilt.  They stand on the marshlands between the mainland and Jones Beach and are reachable only by boat.  Many of the families that own them are direct descendants of commercial baymen, duck hunters, and other maritime tradition bearers.  Where there once were hundreds of bay houses, today stand this modest group.  The houses can only be transferred within the family or to a designated caretaker who shares the lease with a current owner from the Town of Hempstead.  The houses are used by commercial fishermen to store their traps and tools, horseshoe pens, garveys, and other necessary equipment.  In addition, many bay house owners are avid duck hunters, a tradition that dates back to the 19th century when hunters shot ducks to sell to Fulton Fish Market.  Today only recreational hunting is permitted during established seasons regulated by the state.  Other owners are recreational fishermen who catch fluke, flounder, striped bass, and other species.  Most bay house owners have seafood dinners using fresh caught fish and shellfish, prepared simply according to family recipes.

In Great South Bay off the coast of Bay Shore near Captree State Park stand approximately 40 bay houses on Captree, Havermeyer and Sexton Islands. These islands, small in size, have hosted bay houses and commercial fishing camps since the 1800s, a tradition that has been passed down within several families for the past hundred years. James H. Doxsee settled in Islip in the late 1600s, where he worked as a clammer and full- time bayman. Through the generations the Doxsee family hired other baymen to harvest the bay waters. In the mid-1800s they established Long Island’s first clam processing plant, an operation that continued into the early 1900s. During the late 1800s the Doxsee family set up operations on Havermeyer Island, commonly known as “The Fishermen’s Island” by local residents, placing pound traps, a complex series of nets tied to fixed posts, in the surrounding waters where they caught flounder, fluke, and other fish.

The earliest bay houses were modest one-room structures with no docks, running water or other “modern” conveniences such as lamps or furniture. The baymen stayed at the “shacks” while working on the bay. Early bay houses owners included George “Popeye” Waric who caught and sold bait to the sport fishermen at the Wa Wa Yanda Club and also worked for the Doxsee, Henriksen, Whitecap or Sunrise Fish Companies. Waric earned his “Popeye” nickname because he had only one real eye. Clammers, oyster and scallop harvesters and other commercial fishermen made their living at the bay houses, and sold their fish to clubs, hotels and the various fish companies.

When Captree State Park was created in 1952, there was an enormous alteration in Havermeyer Island. The Captree boat channel but off the point of Havermeyer Island, destroying several bay houses, similar to the destruction of Hempstead bay houses during the Wantagh and Meadowbrook Parkways construction in the 1920s and 30s.. In addition the baymen lost a valuable and fertile spawning area for fish and other marine life. More recently the marshlands have eroded due to a significant level of high-speed boat traffic.

There are currently 42 bay houses that were built in the early 1900s. The owners are primarily recreational fishermen and baymen, along with some commercial fishermen and baymen. They hold leases from the Town of Islip, a practice that has been commonplace for most of the town’s history. Like their counterparts in Hempstead, owners harvest local fish and shellfish for family meals and celebrations. Popular recipes among bay house owners today include clam chowder (Manhattan style), clam fritters, barbecued clams and fish. Other local favorites include pickled eels, stewed eels, raw clams and fried clams. For guests the chef, who includes both men and women, prepares linguine and white clam sauce or baked clams.

We love our dear beach house
This place is just grand!
But when it comes to eating
It gets out of hand.

There’s fishing & clamming
and netting those crabs.
But you bring the bread crumbs
bacon by the slabs.

Then someone says, “Hey!
I’ve got a great thought
Let’s fix a small snack
From all this neat stuff we
Just caught!”

Dad starts a choppin’
And Mom grabs the pots
and slowly our thoughts turn
to food, lots and lots.

There’s fritters, chowder
and baked clams galore
do we stop there?
Oh no, we make MORE!

How ‘bout some chicken
Oh, I’ll light the grill!
Throw on some burgers
we just can’t get our fill!

Let’s make a light salad
heat up a can of peas
Get out the cups
Ice tea, if you please!

And what is this here?
potato chips, yummy yum!
And don’t forget the pickles
Yes, I’ll have some.

And just as we clear
the last plate from the table,
Mom says
“Only an hour ‘til dinner
Hold off – if you’re able!”

Just think of the time
we spend cooking & eating
when we could be sleeping,
swimming or reading.

And now it’s time to bid you
a fond adieu
It was great! It was fun! Come
again soon.
But PLEASE, next time you come
Bring just a CHEESE SANDWICH
WITH YOU!