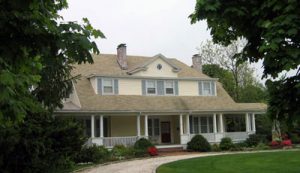 Bayport, situated on the Great South Bay, was the south easterly part of the William Nicoll Grant of 1697. The east line was Namkee Creek, which separated the Nicoll Grant from the Brookhaven Grant. The west line is Brown's River and the San Souci Lakes. It was not until 1791 that the first sales from the Nicoll Grant were made, when a commission appointed by the state sold parcels to pay off the Nicoll debts. There seem to have been a few homes in the area but they must have been renters or squatters. The land was sold in long strips about 500 feet wide and extending for about one mile from the Great South Bay to the South Country Road (now Montauk Highway). Farmhouses were built more or less in a row through the middle of the farms. A large number of these farmhouses still stand today dating back from 1800 to 1860. In 1834 a road was built through the middle of the farms from Sayville to Blue Point connecting the farmhouses, and was called Middle Road. In fact, the community was called Middle Road Village for a while, then became called Southport. It turned out that there was another village upstate called Southport, so when the Post Office was set up in 1858, the name was changed to Bayport. The present Post Office was built in 1956.