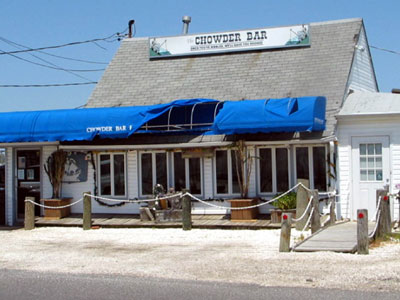 Waterfront hotels and clam bars have marked the landscape of the south shore since the late 19th century, when more visitors, including estate owners, sportsmen and recreational fishermen began exploring the region, during summers and on weekends. Soon afterwards various investors began building summer hotels, from Long Beach to Patchogue, most of which included elaborate dining rooms and restaurants. They included the Clifton Hotel in Patchogue, the Shoreham and Cedar Shore Hotels in Sayville, the Warner Hotel in Blue Point and the Bellport Hotel in Bellport. Roadside eating was a comparatively new phenomenon in the early 1900s when the automobile first appeared on Long Island. There were very few restaurants or eating establishments, outside of the hotels and inns where tourists stayed. However this soon changed with the arrival of the Pine Grove Inn of Patchogue. Founded in 1910 as a restaurant and inn for visitors and businessmen, it stands on the banks of the Swan River. According to local legend the inn was used for rum running during Prohibition, along with other waterfront hotels in Patchogue.

Originally a log cabin structure, as was the fashion of the time, the site has been renovated over the years but retains its simple design. The inn serves primarily German and continental cuisine, a tradition that dates to the 1940s when German immigrants purchased the inn. Prior to that time it served local seafood harvested in local waters. Other existing historic Patchogue restaurants include Louis XIV at the foot of Cedar Avenue, which was originally a clam bar. 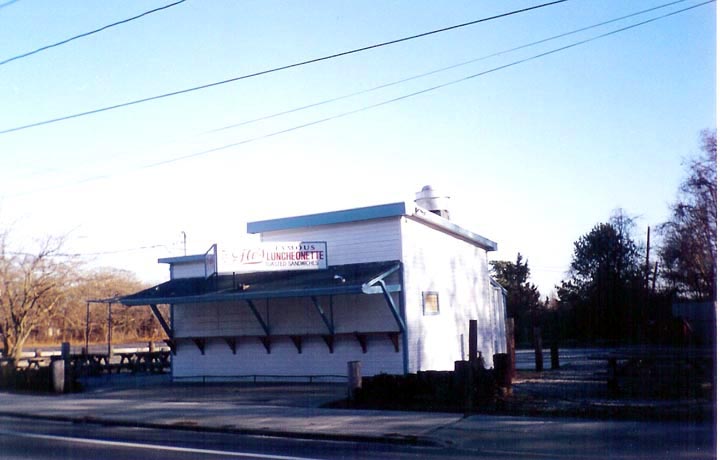 In Blue Point there is the historic Flo’s Famous roadside lunch stand, which is open seasonally from approximately mid-May until mid-September and occasional weekends. Florence Kimball opened this popular lunch stand in the 1920’s, near to the Hotel Monterey and Gene’s Bayview Hotel. According to local historian Gene Horton, it was a “symbol of summer.” When Flo died in 1950, Betty Edmonds took over and there have been a series of owners ever since. There have been few alterations to the original building. The current owners have returned successfully to a basic burger, clam and fish fry menu.

In Rockville Center the legendary Bigelow’s Clam House stands, founded in 1939. This roadside restaurant is an excellent example of a traditional fried clam shack, located in an iconic cape-cod style house. This frame structure resembles many baymen’s homes, with its frame clapboard exterior, dormer windows, and central entrance. Other historic eating establishments include the Baldwin Harbor Inn, the Helm in Freeport, the Crab Shack on Freeport’s Nautical Mile, all of which are located in historic buildings dating from the 1920s.

In addition to these historic eateries, a number of restaurants now occupy historic maritime sites. One example of this is Kingston’s in West Sayville, located in what was once part of the Frederick Ockers Oyster House. Located in a c.1900 frame building, the first restaurant opened in c. 1983. The restaurant is situated on a man-made canal adjacent to the historic Blue Points operations. It serves traditional and recent seafood on the deck attached to the original oyster house. The restaurant is surrounded by a marina.

In addition to these establishments many ethnic groups had festivals and fairs at which they sold local specialties according to their nationality. Lowell Ockers, a retired West Sayville fisherman, recalled that his “grandmother made 40 gallons of clam chowder” for fire department functions and other affairs. Most villages continue to sponsor fundraisers, serving home-made clam chowder, fried clams, steamer clams and oysters using local seafood. 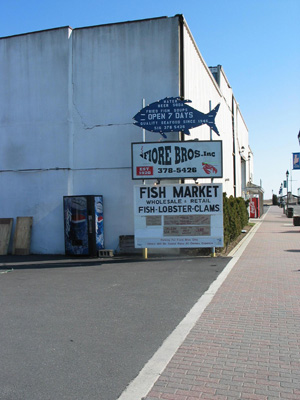 In most south shore communities there are a variety of retail operations connected with the waterfront, ranging from bait and tackle shops and boat yards to restaurants and fish markets. Many local baymen sell their fish to family owned markets, as well as distributors who transport shellfish and finfish to larger fish markets. Long Island caught fish supply a worldwide network including Europe and Asia, serving millions of people around the world.

There are several historic fish markets on the south shore, which date as far back as the late 1800s. They include the Doxsee clam company of Point Lookout, as well as Whitecap Fish Market in Bay Shore, and Fiore’s Fish Market and Two Cousins in Freeport. They are all located in historic waterfront buildings, built by the owners, so that they could negotiate directly with the baymen as they pulled into dock. More recently fishermen have constructed freezers so that they can store the fish until they are ready to sell their catch.

The fish markets were often constructed of wood, topped by gable roofs with two entrances, one from the water and one from the road, easily accommodating the fishermen who pulled into the docks, as well as the customer who would arrive on foot or by car. The fish are displayed openly, so that customers can inspect their purchases by hand. Most markets have maritime decorations on both the inside and the outside. Behind the counter lays the filet table, where customers can pay a modest fee to filet a fish sold in the store or one caught by them. Fish mongers will also clean crabs and other shellfish for a token price.

As waterfront pressures increase on real estate, many family-owned fish markets have disappeared from the landscape. However there are still those who have a loyal customer base, and may survive as the “Buy local” movement continues to grow.