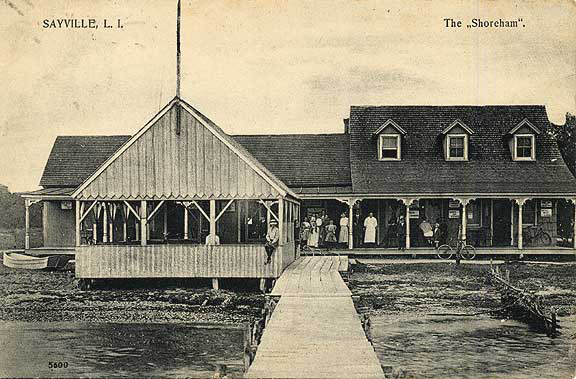 The earliest recreational visitors came to Patchogue in the 1800s, typically businessmen who were involved in transporting the lumber and other products to New York City.  Recognizing the natural beauty of the area, some visitors stayed overnight to enjoy the scenery and bountiful seafood.  However these inns and houses are no longer standing.  With the extension of the Long Island Rail Road, then named the South Side Railroad Company, in 1869, more sportsmen began visiting the shoreline communities.  These late 19th century hotels included the Smithport and Clifton Hotels in Patchogue, the Shoreham and Cedar Shore Hotels in Sayville, the Warner Hotel in Blue Point and the Bellport Hotel in Bellport.   The only remaining hotel in this group is the Bellport Hotel.

They were exclusively summer hotels where guests could go sailing, swimming, boating and enjoy gourmet food including local oysters and clams in luxurious surroundings.  In addition guests could take boat rides to nearby Fire Island or participate in sailing races sponsored by local yacht clubs. The designs were typically Colonial Revival frame structures, generally set back from the shoreline, with waterfront beaches, cabanas and other amusement facilities fronting the site.  Many had gazebos where concerts took place in the evening. 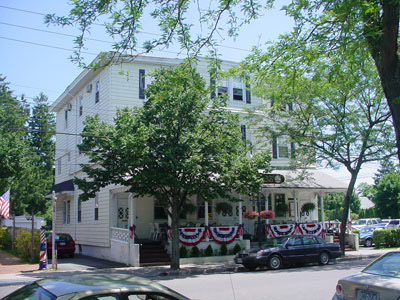 Hotel patrons typically came from New York City and included noted businessmen, physicians and lawyers.  Their comings and goings were carefully noted in the New York Times and the Brooklyn Daily Eagle. In addition to summer hotels there were hotels that catered to sport hunters, who frequented the South Side Sportsmen Club, now part of Connetquot state park.  Baymen such as the Udells and Danes acted as guides for hunters and recreational fishermen.

To bring people to the waterfront sites an elaborate series of trolley lines were constructed including ones that operated in Patchogue, as well as between towns.  This included a trolley line that ran from Patchogue to Blue Point and to Holtsville.  Others traveled by horse and buggy, paying a mere 5¢ in c. 1880.  In addition there were water taxis that transported hotel guests from town to town or to Fire Island. These forms of transportation continued into the mid-20th century, replaced by automobiles and ferries. 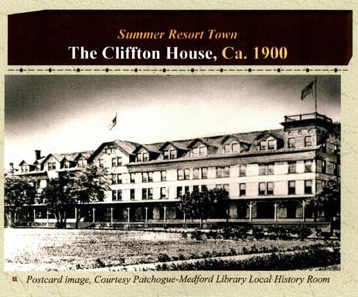 Other communities including Long Beach, Baldwin, Freeport and Bay Shore also had waterfront hotels. In addition there were hotels on the marshlands of the estuary, adjacent to the area’s bay houses.  These included the Wa Wa Yanda Club near Captree Island in the Town of Islip, the Greenhouse located in the Town of Hempstead, and Charlie Johnson’s Hotel on Meadow Island near Point Lookout.  These hotels were extremely popular during the Rum Running era of the 1920s, where illegal booze could be easily hidden and escape the Coast Guard’s enforcers.  Sadly most of the south shore’s historic hotels have either burned down, a common phenomenon in the 1900s, were removed by local municipalities, or were converted to other uses. 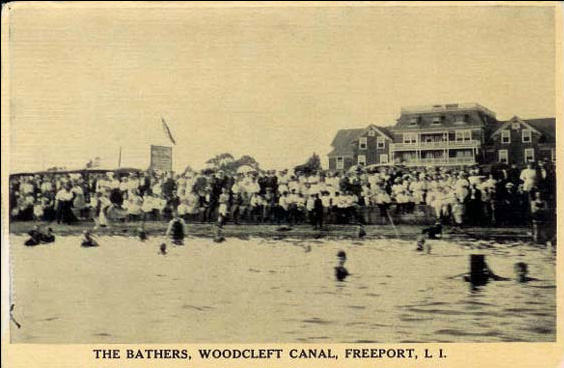