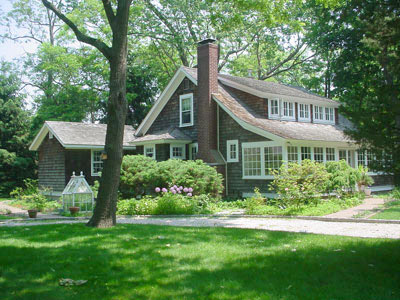 Since the 1870s out of town residents have built summer homes along the south shore, in order to escape the oppressive heat and high population density of New York City. The most popular communities for summer homes were Freeport, Point Lookout, Long Beach, Babylon, Oak Beach, Fire Island, Bay Shore, Patchogue, Blue Point, Bellport, Brookhaven hamlet, Bayport, Oakdale and Sayville. Generally the homes lined the streets closest to the waterfront. Unlike today’s modern families, most summer residents lived at the house continuously during the summer, with husbands and fathers joining their families on the weekends. They also joined clubs, taking sailing trips to Fire Island and High Hill and later Jones Beach on one of the local ferries, going swimming at one of the nearby beaches, sometimes renting a cabana.

Most of these homes were later converted to year-round use, but there are well-preserved examples of these structures that include bungalows with exposed roof rafters, Spanish colonial homes with clay roof tiles, Victorian houses with wrap-around porches and turrets, Colonial Revival waterfront residences with wood shingle sheathing and expansive verandas and other traditional variations on popular architectural styles.

As these brief summaries show, there are a wide variety of styles in historic summer homes that continue to reveal the complex decisions made by local builders in designing waterfront community residences. It is important to note that none of these villages have a local waterfront historic district listed on the State and National Register of Historic Places with the exception of Bellport Village. As result these homes and thousands of others are at risk for alteration, demolition and replacement.