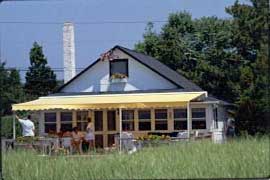 On Long Island’s north shore near Stony Brook and Setauket once stood the summer bungalow community of West Meadow Beach, constructed during the mid-1920s by local families seeking refuge from the raging flu epidemic that plagued the east coast. Approximately 98 cottages were built during 1923 – 35 that included modest size summer homes with stone fireplaces, partition walls, decorative woodwork, exposed roof rafters and outdoor showers, classic features of the bungalow style popular at that time. On October 28, 2004 the National Park Service listed the cottages on the State and National Register of Historic Places.

Since 1976 there had been extensive efforts to tear down the cottages. Under a New York State law written by Assemblyman Steve Englebright, the cottages were torn down beginning on December 5, 2004. While there were efforts to preserve the cottages, including a Town of Brookhaven petition signed by over 10,000 residents, and a Town board resolution in support of extending the leases, Assemblyman Englebright refused to compromise. All but a small number were removed in 2004.

To help us remember this historic community, Long Island Traditions published West Meadow Beach in 2003, written by Nancy Solomon, which is now out of print. The book is available as a pdf. The cost is $10. However we hope that you will remember this special place, and support our efforts to preserve the remaining bungalows and other traditional historic sites of Long Island.