Settlement of the Bay Shore area began in the early 1700’s when John Mowbray received a royal patent and concluded negotiations with Native Americans for the land on May 9, 1721. The deed specified that Mowbray had possession for the neck and meadows, which he used for his estate “Penataquit.” This land transfer was typical of others on Long Island. At the time Main Street was the major east-west thoroughfare in Bay Shore. Not until 1868, when the Long Island Rail Road (LIRR) expanded to Bay Shore and other south shore communities, would the waterfront community experience any major changes, as can be seen by the paucity of pre-1868 structures. 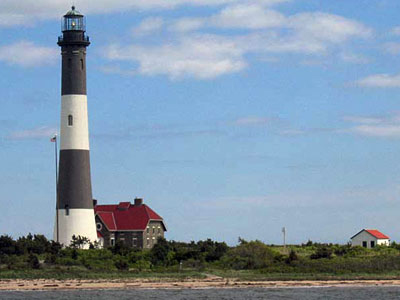 Oystering, fishing and farming were the main occupations in Bay Shore during the 18th- and early 19th-centuries. When the LIRR arrived, Bay Shore grew into a bustling summer resort, boasting 3,135 residents among its hotels, houses, and vacation villas by 1900. John Rogers built a large hotel, the Prospect House, on Ocean Avenue. A ferry that ran from Bay Shore to Fire Island made the community a primary destination for thousands of New York City residents of varying ethnic backgrounds.

With the establishment of the ferry terminal and the growth of the resort business came the building of two hospitals, and numerous businesses along Main Street, then called South Country Road. Bay Shore was the dominant commercial center in the area, a position it held well into the 1960’s. At the same time the Depression and World War II brought a downturn to the resort economy, a fact which can be seen in the architectural development of the community. Today there are few symbols on Main Street that there is a waterfront close by, other than signs that direct travelers to the ferries and fishing docks. 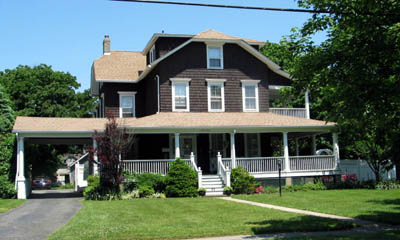 The architectural resources on Main Street include Victorian style houses used for offices, commercial structures dating from 1910-30. The older structures include a one-story c. 1920 commercial storefront with a crenelated facade and cast iron lion shaped medallions. Some 1920s buildings are made of brick while others use stucco. The former Hollyrock Theatre on Main Street is an art deco style building that also dates from the 1920s. Other structures built during the same period contain corinthian columns, elaborate roof cornices and construction date plaques.

Institutional buildings on Main Street include the Parish of St. Patrick’s, a Manufacturer Hanovers Bank, the American Legion Hall which replaced the original Soldiers and Sailors Memorial Building, and the Penataquit United Methodist Church. These structures contain many architectural embellishments including a bell tower, stained glass windows, a Moorish style sanctuary, and decorative tiles.

As one leaves the Main Street commercial district, the community changes almost randomly from a residential area to a commercial area that services boats and other marine related activities. Before World War II one could see the waterfront from Main Street, but changes after the war obscured these views. These include construction of parking fields near the ferries and multi-story commercial structures.

The waterfront area of Bay Shore has no significant manufacturing facilities. A wide range of businesses serving the commercial and recreational marine industries, marinas, and the large ferry terminals are located along the shores and stream corridor ends. The ferry services are divided, with ferries going to Seaview and Ocean Bay Park located on the west side of Maple Avenue, and those going to Ocean Beach, Fair Harbour, Dunewood, Kismit and Saltair leaving from the east side terminal. Each terminal has extensive parking lots for their users. These facilities are used heavily during the summer months. Bay Shore is well known for its delicious seafood and ethnic restaurants. 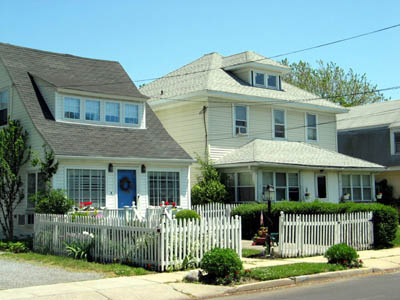 The Bay Shore waterfront community lies south of Main Street and is bounded on the west by Watchogue Creek and on the east by Awixa Creek. There are approximately 300 homes, most of which are single family dwellings, and 5 apartment buildings. Homes in this area date from the late 19th- and early 20th-century. During the 1980s economic boom, several high-priced waterfront homes were built for year-round and seasonal residents.

During the late 19th- and early 20th- centuries most of the waterfront homes had large setbacks on both the street and canal sides. Large trees and plantings provided shade and privacy, features that are still evident on many streets. In addition most of these early estate homes had sizable lots, ranging from 50 to 100 square feet. As a result there is a sense of spaciousness among the historic homes that contributes to the neighborhood’s distinctive identity. This is particularly evident on Awixa Avenue and Montgomery Avenue on the east side of the waterfront area, and on Ocean Avenue in the western part of the survey district.

In contrast to the large summer homes, small family houses were built on Burnett, Auburn, and Mowbray Avenues in the early 1910s. Some of these homes have been added on to, and others have outbuildings including carriage and hay barns, a feature characteristic of homes built by in the late 19th- and early 20th-century. The small homes have small setbacks, and few contain front or rear lawns. The lot sizes are small, and one can easily see activities in the house next door. The original residents included fishermen, shop keepers, and school teachers.

Many of these streetscapes retained their original features until the 1950s, when more people began moving to Bay Shore. As a result of the population increase, several one- and two-story apartment buildings were built in the waterfront area. A combination of different ethnic and occupational groups, including African Americans, immigrants from Central and South America, and teachers and health care workers live there today. The apartments have large playground and garden areas, with setbacks similar in size to the houses nearby. The major difference on streets with apartments is that there is more outdoor recreational activity than on other streets where single family homes dominate. In addition there is more visual and physical access to the waterfront. 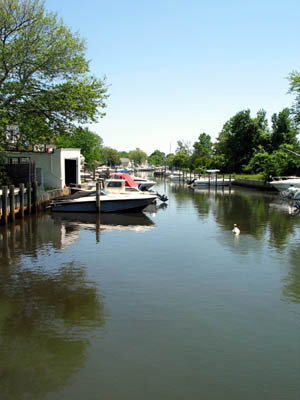 The eastern waterfront area has seen extensive residential development, so that open space is rare. Small lots crowd the southern edge of Awixa, Pentaquit, and Montgomery Avenues. Large and small modern homes dominate these lots. Most of the houses have attached garages that contain similar decorative features to the main house.

Some homeowners have planted large trees and bushes in front of their houses, so that visual access to the bay and the house is blocked. As a result of this trend, which began in the 1970s, there is no public access to the waterfront in these neighborhoods. In addition non-residents lost a significant area for swimming, crabbing and fishing.

Bay Shore has drastically changed over the past sixty years, a fact that is dramatically revealed in its working waterfront. Up until the 1960s there were many clammers, according to local residents. “From the beach, back in the 1960s, you could watch a hundred or so baymen working on the water. And there could be hundreds of people treading the flats, looking for clams with their bare feet. And lots of guys tonging for clams. And there were always trucks on the dock, their drivers waiting for the clammers to come back so they could buy clams.”

Many area children and teenagers clammed summers and after school. “Everyone I knew clammed for extra cash, but you had to have a boat, or access to a boat. Otherwise you had to tread for clams with your bare feet…All you needed was a license.” The people interviewed remember that only white people worked on the bay. There was also eeling and crabbing on the flats, but clamming was the major industry. In addition there are several clam boats that work in the ocean off Fire Island. Today some residents continue to clam at Benji’s Beach, and go duck hunting. Fishing in the streams for trout and weak fish has practically disappeared due to pollution and dumping.

As a result of this filling in, beaches and access to the water became more difficult. “There used to be a few beaches and it was easy to get to he water.” By the 1960s this had changed. As one resident explained, “To me, the water was kind of inaccessible. Yes, you could go to Benji’s Beach, which nobody really went to, it was the local town beach which was just next to the Bay Shore Marina. My mother can remember walking down Clinton Avenue as a little girl and going to Benji’s Beach and wading in the Great South Bay. We were taken there as babies in the 1960s, but the thing that changed was the Robert Moses Causeway. Now you could go to a state park, a state beach. Which we still go to. Or you could go to Atlantic on Fire Island. It was the poor man’s beach when we were in school. The ferry for Ocean Beach was $4 or $5, the ferry for Atlantic was $1.

Beginning in the 1950s Bay Shore began to fill in the wetlands where clamming was active for housing developments. “The idea of a swamp was something you filled in. It was ugly, and it was just a matter of time before it would be made nice.” During the 1960s the ferries began to expand their parking lots into these wetlands, attracting weekenders who parked their cars while they stayed at their houses on Fire Island. According to one informant, “The ferries were a sort of Brightwaters’ kid job.”

The days are long gone when Bay Shore had an active fishing industry, a feeling that is evident visually on the waterfront and in its main commercial district. The lack of wetlands, open space, clean beaches and clam beds have had a dramatic impact on the community’s use of its shoreline. There are few maritime related shops on Main Street, and only a handful on the waterfront. The lack of a major fish market is particularly curious. When Erickson’s Fish Market closed a long tradition ended with it. Today local residents patronize Whitecap Fish Market in Islip, just east of Bay Shore.

In recent years there have been several waterfront condominiums constructed, a trend found throughout the estuary. However there is also an increase in local waterfront businesses, including tours by local ferry cruise boats such as the Lauren Kristy and other private operators.