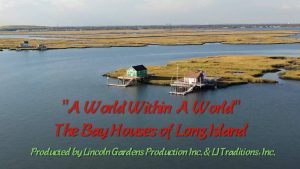 After a long two years since our film festival came to an abrupt pause due to Covid, we are now back on track for our Maritime Film Festival. Beginning on Tuesday, April 26, join Long Island Traditions, the Cinema Arts Centre in Huntington and the Plaza Cinema and Arts Center in Patchogue for a film festival featuring documentaries and feature films that explore Long Island’s maritime culture, from bay houses to bungalows, and boat builders to sailors. The festival will feature five films that explore the region’s marine coastal heritage, with discussions featuring filmmakers, local baymen, boat builders and bay house owners. The festival is made possible with the support of the Robert L. Gardiner Foundation and the National Endowment for the Arts.

The highlight of the festival is the screening of A World Within a World: Long Island Bay Houses produced by filmmakers Barbara Weber and Greg Blank. The film will premiere at the Plaza Cinema and Arts Center in Patchogue on Tuesday, May 24th at 7:30 pm. There will be an additional showing on Tuesday, June 21 at 7:30 pm at the Cinema Arts Centre in Huntington.

The film festival will begin on April 26th with a screening of Charlotte, a documentary about the historic boatyard, the Gannon & Benjamin Marine Railway, located on Martha’s Vineyard. Q&A with special guest Kevin Weeks and Chris Hale of “Weeks Boat Yard” in Patchogue will follow the screening.

Diggers: May 10th – Plaza Cinema & Arts Center. This 2006 film starring Paul Rudd and Maura Tierney is a coming of age story about four working class friends growing up on the south shore of Long Island in 1976. This film will be followed by a Q & A with Long Island Traditions’ Nancy Solomon and local Long Island fisherman Chuck Tekula.

The Bungalows of Rockaway. June 14th, Cinema Arts Centre, Huntington. Produced by Jennifer Callahan & Elizabeth Harris in 2010, and narrated by Academy-Award winner Estelle Parsons, the film examines the historic bungalows of the Far Rockaways that were built by local architects including Henry Hohauser. The film will be followed by a discussion with Elizabeth Harris.

The film festival closes with the screening of Maiden, (July 12th, Cinema Arts Centre) which tells the story of Tracy Edwards, a 24-year old who in 1989 headed the first all-female sailing crew in the Whitbread Round the World, a grueling yachting competition that covered 33,000 miles and lasted nine months. This film will be followed by a Q & A with Edwards and Dawn Riley, executive director of the Oakcliff Sailing School and one of the sailors on Maiden in 1989.

All screenings will take place at 7:30 pm. The Plaza Cinema and Arts Center is located at 20 Terry Street in Patchogue, NY. The Cinema Arts Centre is located at 423 Park Ave, Huntington, NY.

The full schedule for the Maritime Film Festival is as follows:

For ticket information, contact the Cinema Arts Centre and the Plaza Cinema and Arts Center.