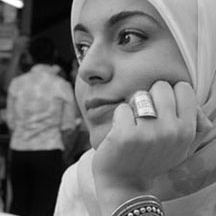 American born Muslim artist Reem Hussein holds a Bachelor’s degree in Fine Art. She completed her training in interior design and the restoration of antiques and decorative arts objects at the Fashion Institute of Technology in New York. Her study and handling of antiques, and preserving of the visual aging qualities of metal, wood, and ceramics inspire the background renderings for her paintings. She combines the effects of modern media and materials with the traditional arts of Arabic calligraphy and Islamic geometric patterns. Reem regards her painting as a spiritual act, and therefore, has turned toward a revival of the traditional motifs of Islamic art for their symbolism of the infinite nature of God through intercepting angular or organic lines and shapes that have no beginning and no end.

Reem’s interest in Islamic calligraphy was sparked at an early age while studying written Arabic in order to read the Quran in its original language; the shapes of the cursive letters fascinated her. While in college, she became more interested in her own heritage as an Egyptian Muslim and searched for a way to reconcile her beliefs with her artwork. Calligraphy provided the answer, as it glorifies God’s words while avoiding the forbidden depiction of human or animal figures. Traditional calligraphy is produced with a reed pen that the calligrapher herself carves to the preferred size, and a homemade ink of soot and other ingredients. Though Reem still practices her art using this medium, her finished works are usually in watercolor. Some Muslims complain that art in mosques is a distraction, but the subtle, calming colors of her chosen medium help Reem to avoid this problem.

Reem has taught children’s classes in Islamic art at the Islamic Center of Long Island, Westbury, but she now spends most of her time painting in her Hicksville home as well as curating exhibits on Islamic art. She hopes her work will inspire both Muslims and non-Muslims to learn more about Islam and to become more tolerant: “I would like for the American public to see what kind of influences and contributions Muslims have made in the past and can make in the future, and I’d like to be a part of that.”

Reem Hussein is the director of the Manes Center at the Nassau County Museum of Art.