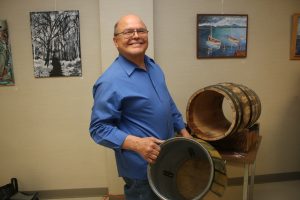 Drum maker Jose Enrique Santiago, known as “Bomba Joe,” always had an affinity for the drums. “When I was in kindergarten in the Bronx there was a little red snare drum in the back of the classroom, and when the teacher said to go get an instrument I would run right for it,” he recalled. He described how an uncle, a merchant seaman, brought him back a drum from India. “It was roughly made from crate boxes and had rope tuning. That was my first drum. My other uncle borrowed it and I never saw it again.”

His other major interest was aviation, leading him to go to Aviation High School. It was there he learned some of the skills that would later help with drum making. “Going to Aviation is where I picked up all the hand skills. Machine shop, wood shop, electrical shop, sheet metal shop, welding. That’s where I learned to use all the tools.”

Born in Spanish Harlem, Santiago lived in the Bronx, Brooklyn, and Queens before settling in West Hempstead. After working several years in the aviation industry, Santiago became a police officer. He spent the next three decades as a Detective 2nd Grade. “I worked everything from undercover, to pickpockets, robberies, decoys, and after 30 years now I’m pursuing my passion, which is drumming.”

He studied with drum masters including Little Red Romero and Johnny Almendra, but credits Tito Saperra, folklorist and percussionist, as being his first mentor. “He taught me the bomba and plena rhythms, but I gravitated more to the bomba,” Santiago recalled. Bomba is the first native music of Puerto Rico, and is played on large, barrel drums. Plena music, which came later, uses handheld drums. Both involve a creative, interactive relationship between percussionists, singers, and dancers.

“Tito Saperra was a legend,” Santiago says of his mentor. But his teacher suffered from diabetes and soon after Santiago began lessons, the elder man began having to endure fingers amputations. “He never complained,” recalled Santiago, describing how Saperra would teach him with bandaged fingers after his return from hospital visits. “I owe him a lot.” 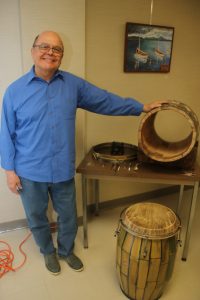 Santiago describes meeting Puerto Rican bomba dancer/musician Norka Hernandez-Nadal. “I watched her dance and my hair stood up. I said ‘wow. This girl is the real deal.’” When he heard that she was going to be giving dance classes, he volunteered to be her drummer for free. “She comes from a long line of bomba dancers, and her father was a great plenaro. … I still enjoy every time she gives a class. She gives a lot of history and insights.” Santiago became a founding member of Norka’s ensemble, Bambula.

Among the groups he has played with was an all-female bomba group (with him as the sole male member). “I noticed by recording and listening that when the girls played everything seemed much warmer, it was more embracing, and when the guys played it was more war-like. Some people like it one way, some people like it the other way. I call it yin and yang bomba.”

Santiago’s foray into drum making was unplanned and evolved from his friendship with drum maker Jay Berrick, who Santiago says made the “Stradivarius of congas.” Santiago purchased numerous drums of all styles from Berrick. Eventually, the two became good friends and Santiago began helping at the shop. When Santiago became interested in the folklore of drumming, Berrick told him “you’ve got drum making in your heart.”

Santiago began by adjusting drum bands for other drummers. Then one day a drummer brought him a feta cheese barrel and asked whether it would make a good drum. And that was how it started. “My wife got on the internet and found a barrel place and I started ordering barrels and took it from there. Little by little, people liked the workmanship, and I was honing my drum making skills with what I learned in the aircraft industry and what I learned from Jay Berrick.”

Although he takes a loss in the labor of making the drums, “the main thing is that I’m able to contribute to my culture’s music and the instrument.” He keeps the prices reasonable so that he can help continue the tradition.

“Eventually what I want to do is teach it. I want to pass it on. I don’t want to take it with me,” he says. He’s already offered younger players the opportunity to learn to make and repair drums and has opened his shop to them. 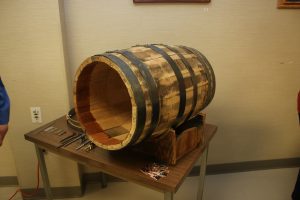 Working with Berrick, he learned that most drums that come in for repair have cracks so in his shop Santiago began incorporating fiberglass, sealing and reinforcing the drums, and so far, he says, they have not cracked.

“When I start making a drum, it takes over. The drum lets me know when it’s finished. I make each one like it’s for me and half the time after I finish them I don’t want to let them go – they are like children.” Despite this, Santiago also does a lot of philanthropy work to ensure that the bomba tradition continues. “If I see talent and they don’t have a drum, I’ll make them a drum.”