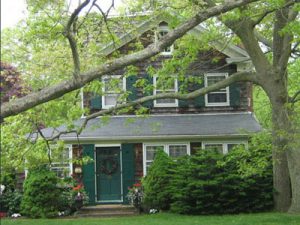 No. of Entrances and Placement: One front door on the west elevation.

Chimneys and Placement: One exterior brick chimneys on the north façade.

Architectural Integrity: High – Moderate; the original roofing material and windows have been replaced. The porch has been enclosed and a large shed dormer has been added to the south façade.

Description:
This two and a half story turn of the century folk house is has a gable roof and rectangular plan. It stands three bays wide on the west and east façades, and four bays wide on the north and south façades. The wrap around porch has been enclosed and is now a one-story addition on the west and south façades. The front door is located at the right side of the porch on the west façade, and is framed by tall green shutters. There is an addition with a shed roof on the east façade. A modern shed dormer features on the south façade. This dormer runs the length of the house and has four windows set into it. The house is clad in dark wood shingle and has white-painted fascia trim. Its roof is clad in asphalt shingle. The windows throughout the house are six-over-six double hung replacements. Dark green shutters frame the windows on the west façade’s second floor. The exterior brick chimney is located on the north façade.