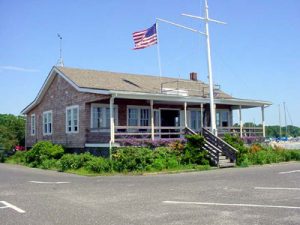 No. of Entrances and Placement: centered double glass doors on the façade and rear (north)

Historical Information: In 1881, the Bellport Village Improvement Association was formed. They advocated cleaning and planting maple trees along Bellport’s streets. The association was replaced in 1900 by the Bellport Village Improvement Society. This society raised funds for lamp posts, improved the grounds around the railroad station, and employed a counsel to bring about the reopening of the dock space at the foot of Bellport Lane. This area had been closed off for general use when the Jewish Working Girls’ Vacation Society acquired the Bay House around 1900. (This building later became a summer camp for boys at the Admiral John Paul Jones Naval Academy and was removed by Bellport Village in 1950 for a public park.) In 1956, Bellport Village bought the Town Dock from the Town of Brookhaven.

At the time of the first club race held on August 4, 1906, the foot of Bellport Lane was a natural strip of land without any bulkhead. Only a narrow dock lined the sandspit’s eastern edge. The J.W. Overton Lumberyard sat on the east side of the dock, just south of Shore Road (known then as Bay Avenue).

After 1921, the modern one-story rectangular building was built at the foot of the dock. The original clubhouse was moved north on Academy Lane and remodeled into a home. The Bellport Bay Yacht Clubhouse was rebuilt after the 1938 hurricane.

Today, Bellport Village owns the land west of Bellport Lane, south of Shore Road, as well as the marina and about forty-acres from the shoreline into the Great South Bay. The Town of Brookhaven owns the land east of Bellport Lane and south of Shore Road. The Bellport Village Marina boasts over 150 berths; including one specifically for the village-owned ferry, the “Whalehouse Point.” The marina features park-like grounds, a launching ramp, an expansive area for fishing and crabbing, a picturesque gazebo, playground, and bandshell where village-sponsored summer concerts are conducted. The Town of Brookhaven’s parcel also exhibits park-like grounds and an open-air shelter.