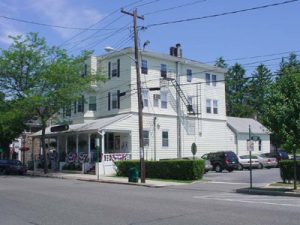 Decorative Features: full-width porch, one-story, across façade with shed roof, turned spindles, and open rail; flared walls at the second-story; and a centered canted bay, on the façade, at the second and third-stories

Architectural Integrity: Center tower with mansard roof, wood shingle cladding, and louvered shutters throughout building have been removed. According to Sanborn Fire Insurance Maps, the rear one-story flat roof addition was built around 1910 while the rear one-story gabled addition was built around 1941 (onto the existing rear pent roof). The two rear units have, since 1941, been connected.

Description: The Hotel Bellport/Chowder House Restaurant sits on the east side of Bellport Lane. A concrete sidewalk passes along its façade, while on the south sits the Village of Bellport’s municipal parking lot.

Historical Information: The Hotel Bellport was one of several hotels in Bellport that accommodated the stream of “city people” in search of a summer resting place.
Built in 1898 on Bellport Lane, the Hotel Bellport offered indoor and outdoor events that made Bellport a favorite summer colony on Long Island.

The heavy mortality rate among children in the New York City during the summer months made escape into the “country” a necessity. Cottages and boarding places sprung up everywhere, the greatest advancement being on Long Island’s South Shore, and builders and carpenters could not be bought at any price once the building season commenced.

By 1908, the Long Island Railroad and some twelve hundred miles of asphalt and macadam roads from the heart of the city, which continued over shell and gravel roads to the end of the island, made Long Island a paradise for the lover of golf, boating, fishing, and other sports and recreation. Long Island was predicted to become “by far the greatest summer playground in the country.”

In addition to the Hotel Bellport, Bellport boasted other luxurious accommodations at the Bell Inn, Titus House (later known as Hampton Hall), the Bay House (later known as the Jewish Working Girls Vacation Society), the Goldthwaite Hotel (later known as the Grasspatch Hotel), and the Wyandotte Hotel. Attractions included charity card parties, held at the Wyandotte Hotel, and summer dances hosted by the “Bellport Bachelors.” The Goldthwaite Hotel also hosted dinners, dances, and card parties. Yachting received precedent above all other outdoor sports in the summer resort colony. The links at the Bellport Golf Club were always crowed on Saturday afternoons.

The Hotel Bellport gained notoriety for hosting the annual Christmas dinner of the Brookhaven Game Protective Association on December 18, 1926. Jerome V. Jerome, President of the Long Island Association of Sportsmen’s Clubs, received a telegram that evening from Secretary of Agriculture Jardine, assuring Long Island game hunters that he would not lower the lawful bag limit for duck from twenty-five to fifteen. Many Long Island politicians attended the dinner, and telegrams of felicitation were received from Governor Smith as well as Colonel Theodore Roosevelt.

With improved transportation amenities and rapid suburbanization, Long Island witnessed the steady increase of year-round communities by the mid-twentieth century. Most hotels were not able to attract their previous summer clientele. The Bell Inn and the Goldthwaite Hotel were torn down by the late 1930s. The Wyandotte Hotel, the Titus House, and the Bay House lasted until the 1950s. The Hotel Bellport, the last of the hotels to be built in Bellport, is now the only surviving relic of that era.