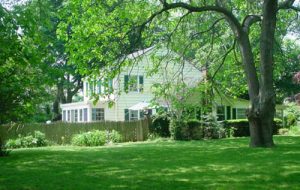 No. of Entrances and Placement:  entrances on both the north façade and south elevations

Description:
The building at 12 Locust Road sits on the west side of the road.  However, a semi-circular gravel drive runs west from the road, passes to the north of the building’s façade, and ends in front of two outbuildings: a guest cottage and a garage.  The guest cottage faces Locust Road (east façade) and has a side-gabled roof with an extended secondary roof.  It has single and paired one-over-one double-hung sash windows with vertical board shutters and a four-light interior door with four inset panels (exterior storm door).  The garage sits at the end of the gravel drive (south façade) and has a flat roof with a side-gabled addition on the west elevation.  The garage has casement windows with vertical board shutter and a roll-up garage door on its south facade.  Both buildings are sheathed in painted wood shingles (sawed and split shakes) and a plain asphalt shingle roof.

Historical Information:
The house and outbuildings were built ca. 1860 by Sylvester Corwin.  The original road to the house went from Beaver Dam Road to the south façade, continued west around the house to the outbuildings in the north (rear) lot.  When lots were sold off the farm after 1900, a new road, Locust Road, was placed to the east of the house.  This explains why the east elevation is visible from Locust Road and the main entrance was moved from the south to the north façade.  The 1873 Atlas of Long Island shows the original road with Captain P. Corwin at the residence.  According to 4th grader Susan David’s 1976 oral history project, Chauncey Swezey bought the house and six-acres from Hampton Corwin.  “When Everett Swezey was born in 1894 his father rode a horse to Yaphank to get the doctor.  He said the snow was up to the horse’s belly and it took most of the day.  Chauncey did some farming and had chickens, cows, pigs, and a horse.  In the winter he worked at the Coast Guard Station at Smith’s Point.  After his parents died, Everett tried to rent the house but couldn’t make enough to pay the taxes, so he sold it to Robert Engelhardt who sold to Contor who sold to Michels.”