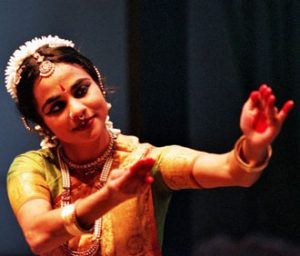 Malini Srinivasan, originally from Maryland, practices, promotes and teaches the dance-art of Bharatanatyam in Lake Grove, Long Island. A third generation performer, Malini is the disciple of Sri C. V. Chandrasekhar, a world-renowned dancer and choreographer based in Chennai (formerly Madras), India. She has received intensive training in the Kalakshetra style, which was developed in the 1930s by Rukmini Devi who started the Kalakshetra dance academy. Bharatanatyam grew in South India and is often held to be the oldest form of classical dance in India. Its style, form, approach, and method are informed by the Natya Shastra, a treatise on Indian drama and aesthetics that dates back two millennia. Bharatanatyam has a number of different, and often times competing, schools of thought, creating a rich diversity of interpretive styles. All draw from the Natya Shastra, and are characterized by two key features: the nrtta (non-representational movements or techniques) and the abhinaya (representational expressions or gestures). Linguistic and non-linguistic meaning in the music is ornamented by body and facial gestures during performances. These symbolic meanings in the dance illustrate and detail a state of anticipation between a dancer-devotee and her desire for union with her beloved, who has divine as well as human qualities. Many of the themes address stories of Krishna or other deities in Hinduism, and can be understood in both the secular and sacred sense. In its performance, Bharatanatyam encompasses many unique elements, including dance, music, religion, and dress.

Malini’s training began in 1980 by studying under her grandmother Komalavalli Mani (disciple of Pandanallur Meenakshi Sundaram Pillai) and her mother Radha Srinivasan (disciple of Tiruvuluputtur Swaminathan Pillai). From 1999 to 2004, Malini lived in Chennai perfecting her dance, as well as learning Carnatic (South Indian) vocal music, Yoga, Kalaripayattu (a style of martial arts), Nattuvangam (dance rhythm system), Sanskrit and Tamil. Coming from a family with a history of performing and teaching Bharatanatyam, she maintains that it has always been a part of her life. She draws special inspiration from her grandmother, who began learning at age eight, stopped at age twelve and married at fifteen, and who, at twenty, started teaching out of her home in Mumbai. After her husband’s death, her grandmother was able to devote more time to dance and started the Gitanjali dance academy. Radha, Malini’s mother, taught out of their basement in Maryland where Malini first learned to dance.

Her 2005 performances include a solo recital conducted by Sri. C.V. Chandrasekhar at Bharat Kalachar during the Music Festival in Chennai, participation in a group dance production for India TV, NY, choreographed by Thejeswini Raj, and recitals at the Wang Center at SUNY-Stony Brook, at the Asian Heritage Festival at the Middle Country Public Library in Oakdale, New York, at Dowling College under the India Heritage Institute of Long Island, and at the World Village Festival in Helsinki, Finland. Malini choreographed and performed Mustard Seed, an exploration of a Buddhist tale, at the UN Commission on the Status of Women in New York City. Mustard Seed is a solo dance piece using the Bharatanatyam technique, with music composed by Ilari Kaila. In 2004, her performances include solo recitals conducted by Sri C.V. Chandrasekhar at the Sri Siva Vishnu Temple in Lanham, Maryland, and the Narada Gana Sabha Mini Hall in Chennai under Natyarangham. She also performed a solo recital at Caisa Cultural Center in Helsinki, Finland, sponsored by the Embassy of India.

Malini takes her teaching seriously, and enjoys passing knowledge of this dance tradition to both Indian-Americans and others. She has a high degree of respect for her Guru, who she considers “an open minded, very wonderful person.” She feels that in order to do justice to her students and be a proficient teacher, she must continue developing her performance skills, and continue studying under Sri Chandrasekhar. “Teaching is my life, and is my livelihood…but I still consider myself a performer.”

She encourages her students to travel to India to study in Chennai, experience a different way of learning, and to understand the unique relationship between a student and teacher in India. She emphasizes that Bharatanatyam is not just a dance, but also part of the fabric of life in Chennai, and part of the learning process should be to experience the weather, mannerisms, ways of showing respect, and the rhythms of life in this South Indian city.

According to Malini, learning Bharatanatyam in New York establishes and maintains ties to India among second generations in the U.S., and serves to teach others about Indian culture. She has found non-Indians to be quite receptive to and curious about this art, and considers it important to inform those outside of the Indian community.

You can reach Malini directly at malinianddancers@gmail.com. For a performance review click here. For videos, click here.