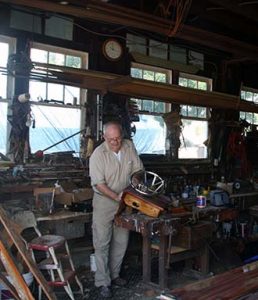 Paul Ketcham, Jr. was born in Amityville in 1935 to a local boat builder family. During the 1930s depression, Paul’s family settled in Florida, where his father worked in the Daytona Boat Works. In 1944, following the death of his grandfather, Paul’s family returned to Amityville and the boatyard began its active operation.

Growing up in Amityville, Paul helped his father with the maintenance and construction of various wooden boats; primarily skiffs, garveys, and power boats. Paul began working for his father in 1958, and purchased the business in 1991. “About twenty years ago I bought it from my father: he didn’t give it to me, I had to buy it. I got a lot of his old tools, all his old frames, and I was pretty well set.”

Early work in boat building for Paul shifted towards boat maintenance “when all the old wooden boats came in here to be repaired, around thirty years ago.” This shift met the increasing popularity of fiberglass boats and changes in the price, quality, and availability of long leaf yellow pine, plywood, cypress, teak, and mahogany. In 2001 Paul began using Spanish cedar for “patching up boats…they have a hell of a smell and an awful taste. But it bends good, it works good, and is nice looking wood; it almost looks like mahogany.”

After Hurricane Sandy and sustaining a knee injury, Paul retired and sold the Ketcham boatyard.